I believe I was first introduced to you as, ‘The third silent member of Cemetery Club’ in Sheldon’s prior post Capturing the Moment.

I am Nick, Sheldon’s cousin, graveyard lover, photography enthusiast and not so silent after all.

I decided to make my debut post after some gentle persuasion by Sheldon, I was hesitant, Sheldon is somewhat of a wordsmith and Christina (though I’ve never actually had the pleasure of meeting her) I understand to be very cool and current. I am none of these and so felt a little underwhelmed at my previous attempts of writing a post and they have never seen the light of day.

I’ve always found graveyards interesting and peaceful places, wind, rain or shine they always invite me in. Northwood cemetery was my first experience with the dead, it’s also where I had my first kiss, first cigarette, and the first time I strongly believe I saw a ghost (I believe I’ve seen two since which I may write about at some point). When I noticed Sheldon tweet about visiting the Magnificent Seven, being nosey/intrigued, I decided to Google it and there learnt about the existence of these seven large cemeteries in London.

I immediately wanted to tag along on his expeditions, to see just how magnificent they were, to spend some time with a family member and to hopefully capture some decent pictures for my growing portfolio.

As you may know, Sheldon is Victorian gentry trapped in the body of a 20th century Whovian, he researches each cemetery before we visit or accesses his mind palace a la Sherlock, and his inner guide comes out, there is no need for me to do anything more than ensure my camera is packed, batteries charged and filters gleaming.

Together we visited Kensal Green Cemetery a few weeks back, the first of the Magnificent Seven to be opened 181 years ago. We met late, arrived at just after 3pm to be greeted with the opening hours sign informing us we had 50 minutes to cover 72 acres. The terrible weather London had suffered in the week leading up to our visit made it treacherous underfoot and made the whole place more akin to a pig pen than the final resting place of nearly 70,000 people.

We wandered around for a little while, Sheldon checking out the graves and tombs, looking for a name that may ring a bell with him so he may impart a little of his knowledge onto me, myself checking out potential photo opportunities whilst keeping one eye on my cousin, for he wears flat soled boots with a pointy toe and they are most certainly no match for muddy wet slippery surfaces and I would hate to see him on his backside. The first shot I saw was of the Anglican chapel through the cover of the trees, I took a couple of snaps, checked the result and decided a long exposure would give it the sombre look it was crying out for this day, I carefully set my camera on its tripod, focused the shot, fitted my 10 stop filter to cut as much light as possible for the lengthy exposure and hit the shutter release, 30 seconds later, it was much too dark, I needed a longer exposure, for this I required my cable release, could I find it in my carefully packed bag? No, bugger, packed up my kit and followed Sheldon on towards the colonnades of the chapel a little disgruntled but optimistic of some chances that didn’t require a lengthy exposure or the need for my cable release. Amazed at the sheer size of the cemetery Sheldon admitted that he hadn’t realised quite how big it was, although he had previously visited with Christina, we knew we would need another visit as we had covered little more than a couple of acres and had barely 25 minutes until we would be facing the prospect of a night under the stars when they locked up at 4pm sharp.

Onwards like a pair of Christian soldiers we went, we planned to push our luck and play ignorant if we were collared past 4 o clock, miles from the exit, that or bunk over the wall, which may not have been the best idea seeing as it’s being held up with scaffolding and sand bags, and Sheldon has those silly boots on, hardly wall climbing attire. A few snaps later and I decided to review what I was capturing, well let me tell you, it would be an insult to others to call myself a photography enthusiast, over exposed, under exposed, jet black, bright white, blurry, not a keeper in sight, I was clearly suffering from photographers block, I hadn’t had the chance to pick up my beloved Nikon in a good few weeks so I put it down to that. I managed to reel of a number of ok shots and a few that could be saved with the power of Photoshop, holstered my camera and spent a little longer listening to Sheldon’s narrative. We managed to make it back to the main gate but were marginally late enough to be greeted with an iron gate securely locked, as luck would have it, there happens to be another exit, the west gate, open until 5pm, excellent, another 45 minutes of leisure and still plenty more to take in, we found Isambard Kingdom Brunel’s grave by chance another of somebody I’ve never heard of but was of interest to Sheldon and this grave which I was asked to note for future reference. 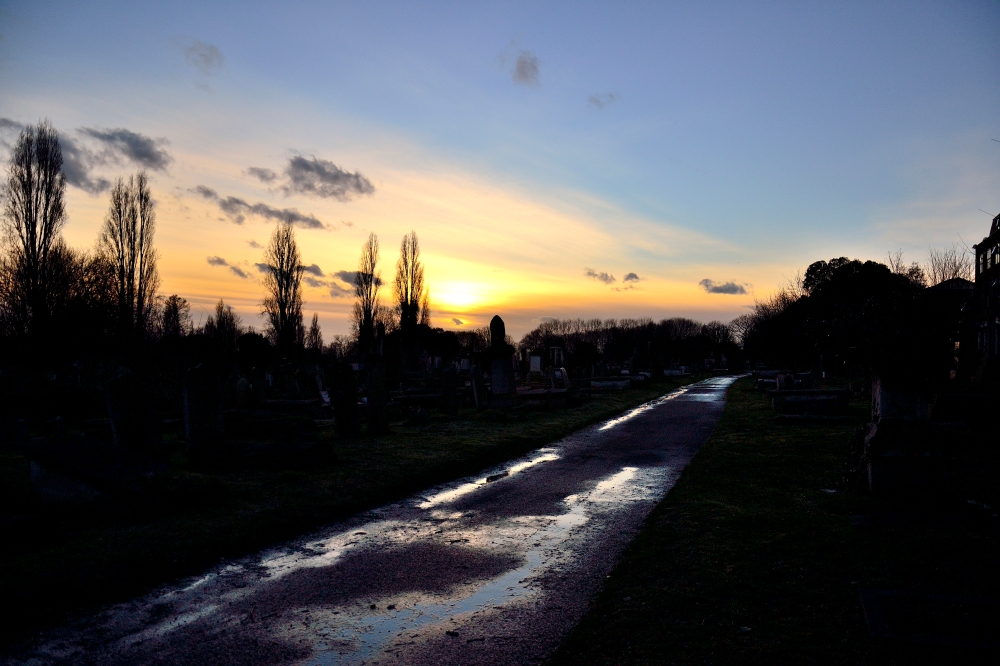 The sun was beginning to set as we slowly made our way out. By chance we happened upon the grave of Byron Contostavlos, Bass Player in Mungo Jerry and father to Dappy of N-Dubz, his grave decorated with the image of a guitar and the lyrics to one of N-Dubz’s songs in memory of him. There was also a beautiful Italian family tomb in pristine black marble… with a White PVC door.

And the realisation that the cemetery continues on for miles, behind the tree line at the car park exit. We barely scratched the surface of this truly magnificent cemetery and we agreed to return another day. On the way out I put my hand in the back pocket of my jeans and found my cameras cable release. Enthusiast photographer? Amateur at best.

For a larger selection of Nick Richards photography, please visit:

7 thoughts on “Cousins at Kensal and Camera Chaos”

View all posts by nickrichards81