I learned a new word this week. My friend Patrick taught it to me. Taphophile means ‘someone who is interested in gravestones, funerals, epitaphs and cemeteries’ and I think that describes us here at Cemetery Club quite well. Sheldon doesn’t really like the term, preferring ‘Cemetery Enthusiast’ but I’m enjoying using the new word. I might have some ‘taphophile’ badges made up…I also like the phrase ‘Tombstone Tourist’. 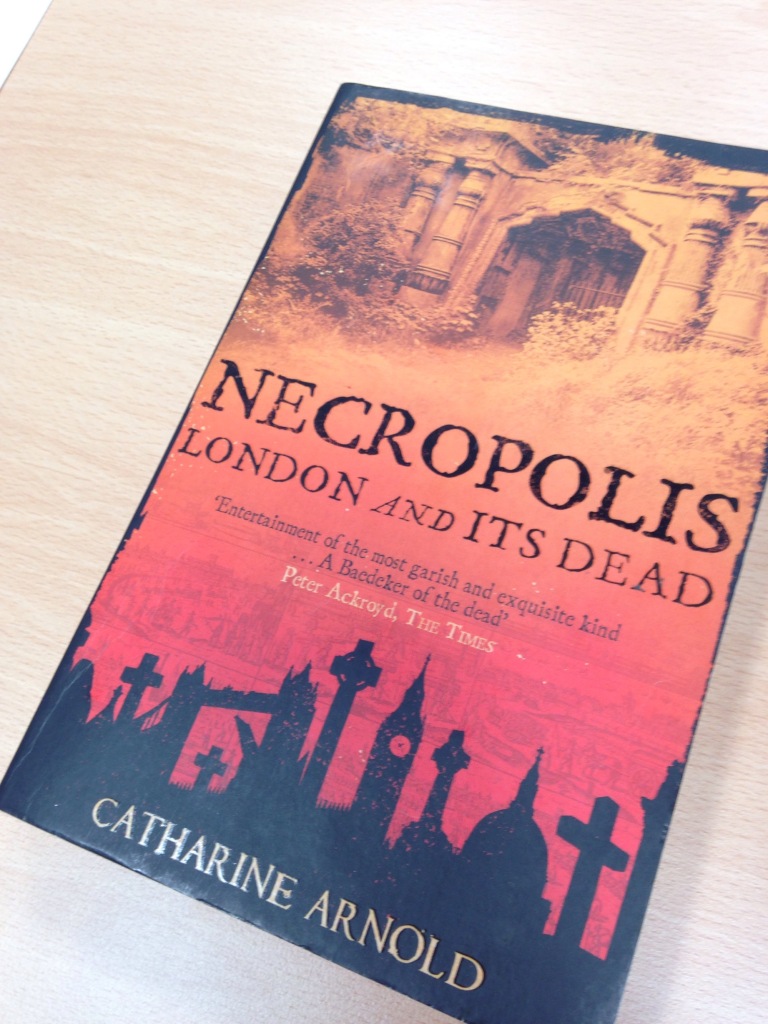 Also this week I got lent a book about everything we love here at Cemetery Club – the gore and grime of ye olde London and the dead rubbing shoulders with the living to an impossible and un-liveable extent. All of this is explored in glorious, graphic detail in Necropolis – London and It’s Dead by Catherine Arnold. I excitedly told Sheldon that I was reading it and with a raised eyebrow, he told me he had used it as his Bible when we began the blog and he was surprised I hadn’t read it yet. I replied that my Bible back when we started Cemetery Club was The Twilight Series. But in truth, yes, I am newly discovering this book and enjoying learning new facts about grim London in the 19th Century. I thought I would share some with you and together we can bask in the joys of knowing that it is now possible to traverse London from north to south, west to east without breathing in the stench of a thousand bodies spilling out of overcrowded churchyards. We’ve come a long way since the 1840’s…..

By 1842, the life expectancy of a professional man in London was 30…

In the early 1800’s, one duty of a church sexton was to ‘tap’ coffins to let gases escape, otherwise they would build up to a dangerous extent and ‘detonate’ from their confinement. Coffins were known to explode due to the build up of noxious gases emitting from the deceased. 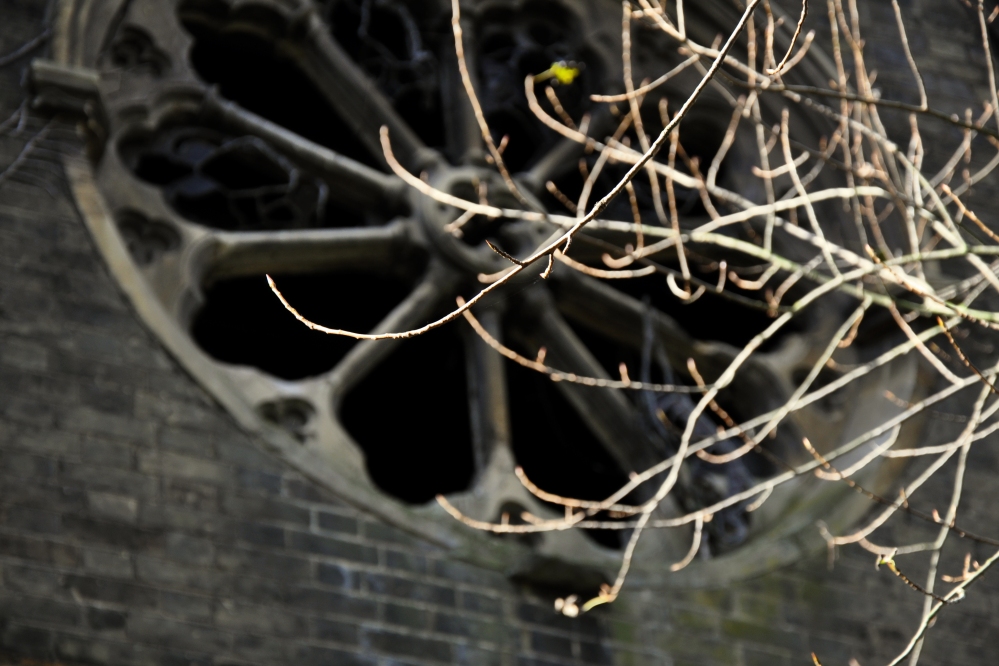 There was an outbreak of Asiatic Cholera in London in 1831, having reached our shores from the far east. By the autumn of that year, 5,000 people in London had already died. The Government response to the epidemic was to call a national day of prayer and fasting. Clerics declared the epidemic a vengeance from God for London’s wickedness. Such was the strength of the illness that it could take hold and kill you in a matter of hours.

Dr John Snow was the first person to establish the link between water and cholera, in 1854. He noted that the disease seemed to affect the alimentary canal (digestive tract) before the patient even began to feel ill, concluding that it must be caught through swallowing in some way. When he died in 1858, John Snow was buried in Brompton Cemetery, one of the Magnificent 7 garden cemeteries to be opened as a response to burial overcrowding. 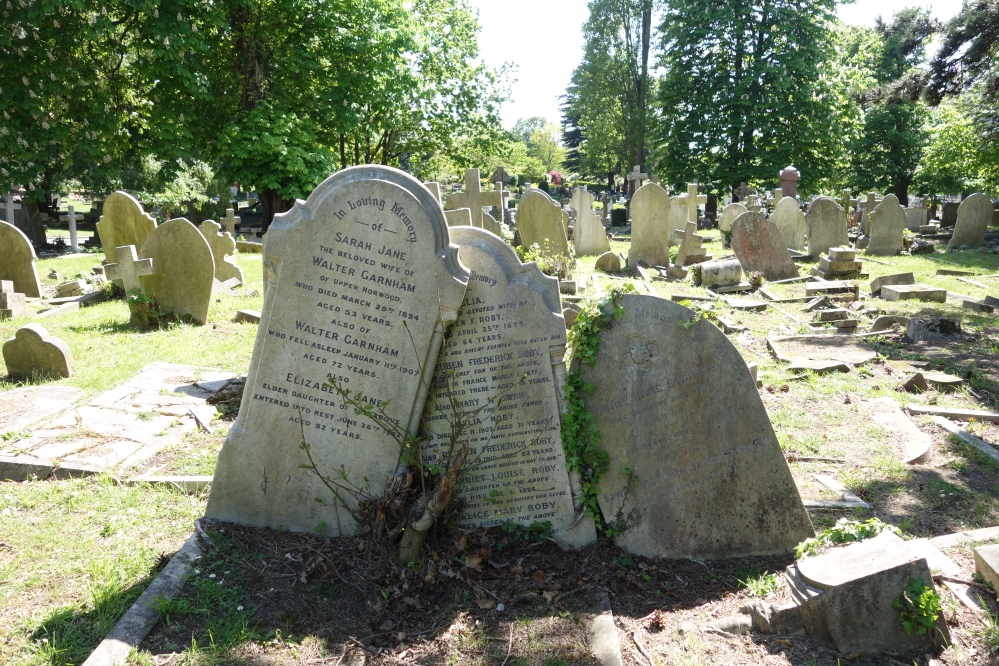 Gravediggers’ jobs became unbearable during this time, as part of their workload involved opening coffins to disinter bodies or to make room for the more recently deceased. The more experiences of these would immediately retreat backwards after opening a coffin, to escape the corpse gases until they dispersed. Gravediggers suffered bad health and alcoholism – it was claimed they could not perform their duties without heavy spirits.

Part of London’s sanitary reform was to close inner city burial grounds, and this began to happen in the 1850’s. So great had the problem been that the city continued to stink of death for another decade after that. During ‘The Great Stink‘ of June 1858, a smell rose up from the Thames that was so strong that it forced the House of Commons to adjourn. All the curtains in the Commons were soaked in chloride of lime to try to reduce the smell. Tons of lime were dumped in the river every day, and this was the start of the sewer system that we know today – 83 miles of pipes were built across London to stop raw sewage from being pumped into the Thames – the end of the pipe line emerged far to the east of London and dumped it in the river at a point where the majority of the population would not be affected by it.

Sheldon and I are by now very well acquainted with the seven grand garden cemeteries that were built on the outskirts of London in the mid 19th century, but you may not be, so here is the complete list of the Magnificent Seven Cemeteries, which, that time, all stood within a 6 mile radius of the city of London, surrounding it in a circle, like the figures on a clock:

Stay tuned for more grizzly facts about Victorian London in future posts. I have several more books about the era on order, so have no doubt that I’ll be sharing all my new found knowledge of all things dark and decaying in the 19th Century with you as I find it out. Sheldon is our resident expert on Victorian history, and all death-related things from that time, but I’m still learning, and I’m sure many of you are as well. It’s fascinating to know about all of the subjects we cover on the blog. I’m looking forward to discovering more, and making more Cemetery Club visits to places all over London. Please leave a comment and tell me your suggestions for places to go and things to see!