If you’ve ever loved the roar of traffic and the screaming engines of passenger aircraft, there is one cemetery that stands head and shoulders above the rest. 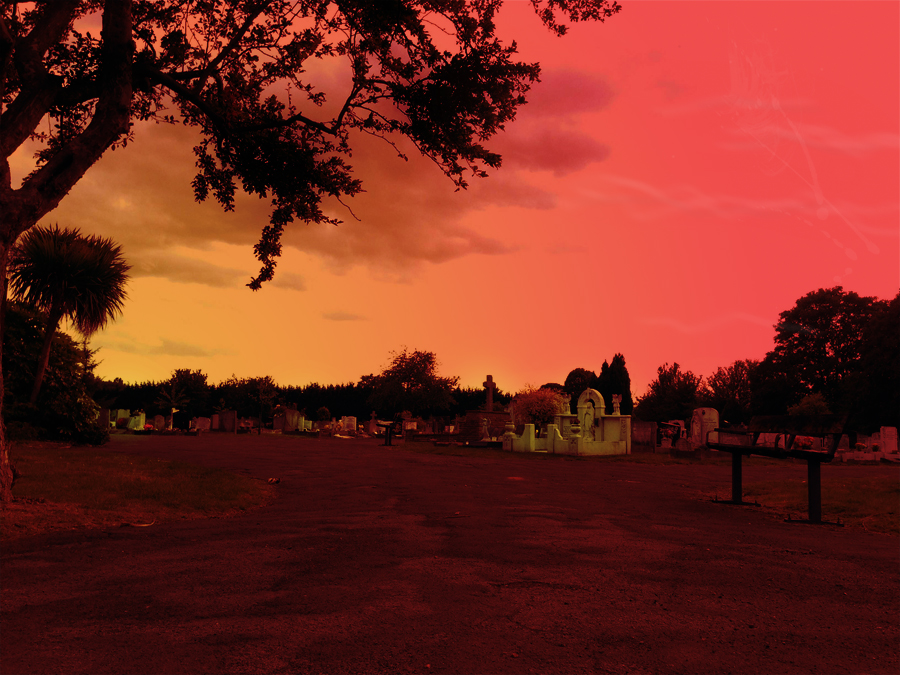 Located near the idyllic Chiswick House and beautiful A136, behind the stout iron railings and red brick pillars is probably one of London’s least tranquil and restful cemeteries, being next to a train line and lying directly under the Heathrow flight path.

This is Chiswick New Cemetery, which opened on what used to be water meadows in 1933. There is no extravagance is here. It’s Municipal. It’s Functional. It does the job. There are no mausoleums: there are one or two angels, but otherwise it’s mainly low level marble headstones which resemble a conveyor belt of teeth.

There are some things to look out for, such as the very striking chapel made of Portland Stone and red brick and the many Russian Crosses, reflecting the Russian community that has settled in Chiswick over the years, as well as the large Irish Catholic contingent who drape many graves with rosary beads and images of Our Lady. 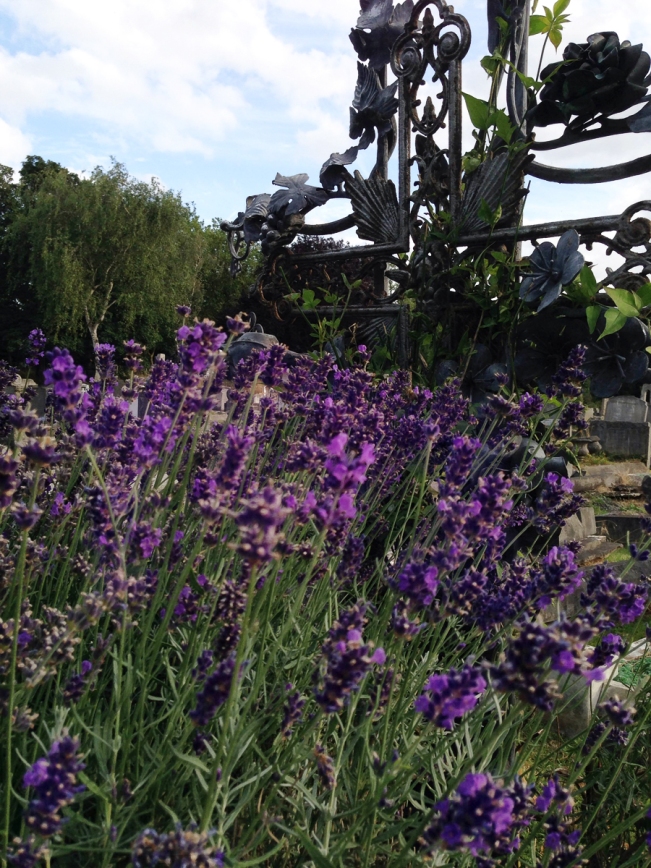 One of the things I learnt when visiting Chiswick New was that John Sullivan wrote something other than Only Fools and Horses. For here, beneath an intricately crafted iron floral cross and a vast mass of Lavender which was swarming with honey bees, is the actor Ralph Bates, best known for his role in Sullivan’s short-lived ‘Dear John’ sitcom. Born in Bristol in 1940, he was the great-great nephew of vaccination and microbiologist Louis Pasteur and became known as a key actor in the later Hammer Horror films.

Other figures buried here include the Car Lady of Chiswick, Anne Naysmith, who made the headlines a few years ago after living in a shelter behind Stamford Brook station after being evicted from her house. A formidable concert pianist in her youth: she experienced heartbreak in the 1970’s which pushed her to willingly living on the street. She accepted no charity and lived on £10 a week – her clothing was a mixture of different umbrella materials and her shoes were made of supermarket carrier bags, pigeon feathers and elastic bands. Despite her poverty, she had a stock broker in the City and an investment portfolio. 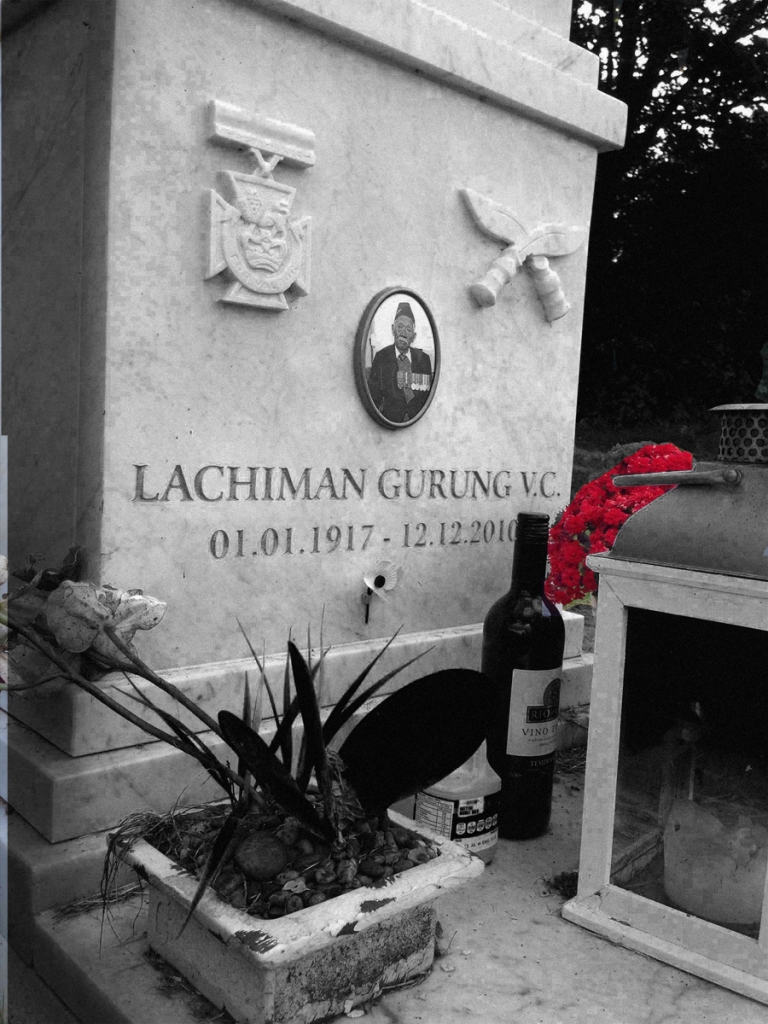 Here too, towards the back of the Cemetery by a very tall Leylandii hedge, is the grave of Havildar Lachhiman Gurung VC of the Gurkha Rifles, who won the army’s highest accolade in World War II by repeatedly throwing grenades out of the trench he was in with his comrades. The third grenade exploded as he held it, blasting off his fingers, shattering his right arm and severely wounding his face, body and right leg. Despite this, he kept on fighting, singlehandedly repelling an attack by the German forces, killing 31 of them alone by firing a machine gun with one hand.

His grave is very Victorian, with the Cutlass’ of the Gurkhas carved into the front alongside his war medal and amusingly, an unopened bottle of red wine and a half pint of milk left in front of his epitaph.

I met a delightful Cat at his grave.

Anyway, there’s another reason why I’m writing about Chiswick New.

Exactly one hundred years ago on the 5th August 1915 in the front room of 25 Stephendale Road, Fulham, Florence White gave birth to her second daughter. Later insisting on being called Clare because ‘Clara wasn’t posh enough’, she was me and Nick’s grandmother. An ardent animal lover who as a child used to bring home dogs and cats she’d found from South Park (they had owners, but that never bothered her).

She met our Granddad, Bernard, at the Hammersmith Palais. His family couldn’t believe he’d bagged this titian haired beauty and what’s more remarkable is that he didn’t know her true age until she received a letter concerning her pension on her fiftieth birthday. Most people thought she was ten years younger than she actually was. One thing we never found when she died in 2001 was her birth certificate.

Anyway. this day would have been her 100th birthday. Clare was buried in Chiswick New in 2001, alongside her husband and parents-in-law; Joanna Traynor, a former teacher from Mooncoin and John Traynor, who seemed to have some very dodgy links to Liverpool and possibly the IRA.

She, alongside my other Nan, was a huge influence on me and her passing was one of the initial things that got me interested in cemeteries. To mark it, I’m dedicating this post to her and taking a half-day off from work to spend the afternoon at her graveside, with a tinned cosmopolitan from M & S, in memory of one of the greatest women I’ve ever known. 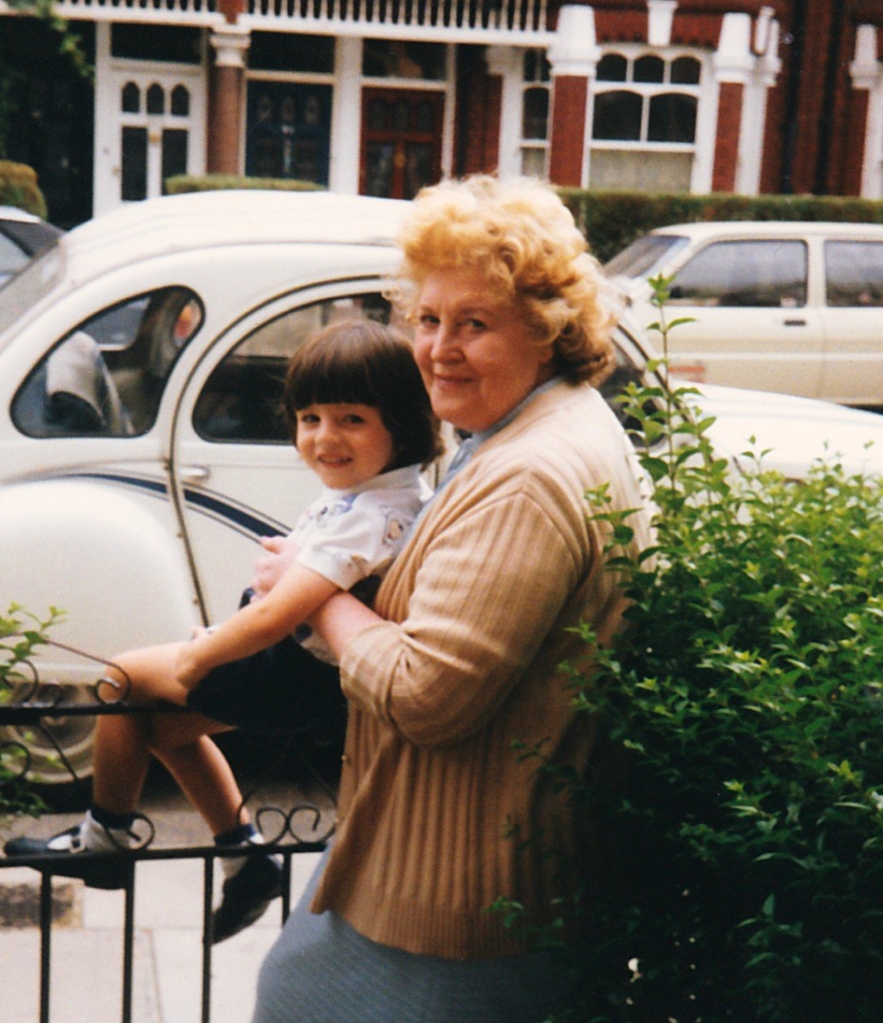