Two beautiful angels have been silently guarding the people buried beneath.

These seraphs are in London; one is very well known, the other – practically unheard of. Hidden away behind a toolshed and overshadowed by a tree. Today, Cemetery Club is off to a two cemeteries in south west and south east London to look at a pair of angels which rival anything you’d find in an art gallery.

This is the angel that mourns the passing of George William Lancaster in East Sheen Cemetery. Lancaster hailed from the north and made his fortune in coal mining. The Sculpture is a rare example of being as dramatic as the life of the man it remembered, for shortly after his wife Louisa’s death, it transpired that they weren’t actually married – but were and had been married to other people.

Louise’s son was taken to court by the real Mrs Lancaster after Louise’s death. In the four times that Captain Arthur Lancaster was called, it was eventually revealed that he had registered his mother’s death under the name of Lancaster, given her title as Mrs and confirmed that she was the widow of George. Further questioning revealed his true surname to be Jones and that his father had divorced his mother after he’d found out about the adultery with ‘Uncle George’.

The angel, seemingly having cried so much that its tears have oxidised its entire body, was made by Sydney March. Born in Stoneferry in the East Riding of Yorkshire in 1876, March was a remarkable talent who came from a family of artists; indeed, his 8 siblings and he all lived together in a house called ‘Goddendene’ in Farnborough, Kent, where they shared three studios and even had a metal foundry in the grounds to enable pieces like the above to be sculpted. Charmingly, footage exists of them working alongside each other on the British Pathé website.

Londoners may already be familiar with his work. March exhibited many times at the Royal Academy between 1901 and 1932 and statue of Samuel Bonington in Bermondsey and the angels of Bromley war memorial are all by him.

The other Angel is just as beautiful – and yet despite my best efforts, I can’t find that much information about it. Architectural details are scant online, but in a very sheltered part of St. Luke’s Cemetery, Bromley rests this astonishing piece. 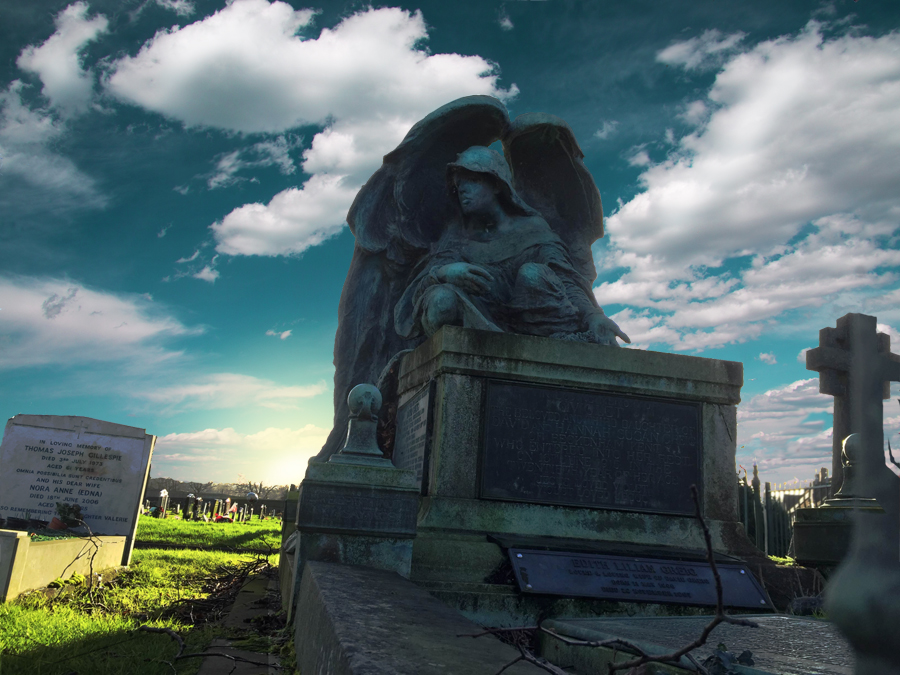 This is the funerary monument of David Greig and family.

Who? Well, perhaps ask your Mum and Dad; failing that, your grandparents. If your family lived in London or the south within the past Century, they will know the name. The Greig’s were shopkeepers and were the business rivals of another shopkeeping family – Sainsbury’s. The Greig’s and the Sainsbury’s had a retail war which lasted for decades- all started by an argument about how the Sainsbury’s felt that the Grieg’s were breaking a verbal agreement about which sites to develop for shops. Supermarket turf wars.

Although the family came from Hornsey, North London, they were keen to promote their Scottish ancestry, which can be seen in the many Thistle Motifs which were used in stores and in their branding. With a huge headquarters in Lambeth and 220 stores across the South of England, how did the name simply vanish from the High Street?

In 1972, a number of men from the family died one after another, and the crippling death duties on their private holdings forced the firm to sell up to a company called Fitch Lovell. Numerous buy-outs now, technically, leave the Greig name in the ownership of Co-Op.

Let’s take a moment to remember these two Bronze angels and the lives that they commemorate.

East Sheen Cemetery and the “Angel of Death”

7 thoughts on “The Bronze Angels of London”