The scene that met the Policemen made them collectively shudder. Robert and Nathaniel Coombes were calmly playing cards downstairs. Their mother was nowhere to be seen. But she was in the house. Upstairs, lying in bed, actually. Murdered. Her face had been largely devoured by maggots while rats had eaten her brain, heart and right lung. She’d been dead for ten days and it was an unusually hot summer.

When the Police entered, Nathaniel, the younger brother, fled. Robert resolutely stood his ground. ‘I did it’ he said, defiantly. Matricide. Killing his Mother because she had given Nathaniel a hiding for stealing food; a threat, originally devised by Nathaniel was carried out by the elder because ‘he could not do it himself and asked me to do it’.

The scandal caused a sensation. Poor Emily, meeting a brutal end, was laid to rest in what was then Bow Cemetery, amidst secrecy, whilst her sons stood trial for a crime that fascinated and terrified Victorian Society. 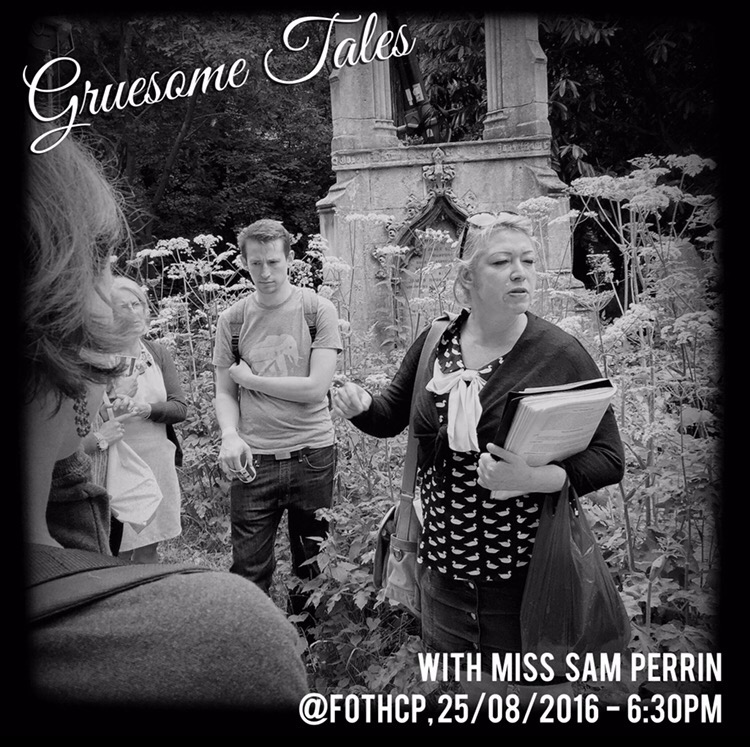 Tomorrow at 6:30pm we debut a new tour to the Cemetery Club roster – courtesy of experienced Highgate and Abney Park Cemetery tour guide Sam Perrin. The Gruesome Tales of Tower Hamlets looks into the grisly ends and gory deaths of some of the thousands of people buried here – key characters like Alfred Lovell who was crushed by a steamroller after saving a little girl from the same fate, Alfred Linnell, the Charles De Menezes of 1880’s London; Thomas Lechmere, who died in the Bethnal Green Tube Disaster (whose father, Charles, was also a suspect in the Jack the Ripper case – buried here too) and many more.