In last week’s post you lucky readers were treated to a cockney singalong about an exhibition of strength that cemented the reputation of the first proper celebrity bodybuilder.

This week we take a look at a man who sung the song and, for decades, has been nothing more than an aside compared to his far more famous wife.

Alec Hurley. I say his name and you’re probably wondering who the bloody hell I’m talking about. Hurley was a singer, performer and comedian. You will probably know, or at least heard of, his spouse – Marie Lloyd, the 1910’s equivalent of Celine Dion. Marie is that enduring star whose light still shines almost 80 years after her death. Hurley has not been afforded the same level of respect and fame despite being the gentler and more caring of Lloyd’s husbands, so stand aside Marie; you’ve had enough attention – this is Alec’s moment.

He was once part of one of the Edwardian Era’s most celebrated couples. A them-days  Brad and Angelina. Now however, his grave and memory, like her two other husbands is lost in a sea of greying marble and granite, indistinguishable from its neighbours in the only woodland in Zone 2.

Hurley was born in 1871, the son of an Irish sea captain. His family discouraged him to following a career in showbiz and recommended that he get a job as an administrator in the docks. He obliged, but the call of entertaining was too great and one of his first engagements was at a pub in Portsmouth where he would sing to Sailors in lieu of food and lodgings. When this opportunity dried up, he packed up his belongings, returned to London and started performing at Poverty Corner.

What is Poverty Corner?

It’s a part of town where those of a performing bent would essentially busk in the open air, hoping to get the attention of a music hall manager for potential gigs. The area is still a hub of entertainment although it now looks very different – it’s where the BFI IMAX now stands. Alec went through the motions and he got his first gig at the Middlesex Music Hall and shortly after also got slots at the Star in Bermondsey and the Marylebone. Songs like the ‘The Strongest Man on Earth‘ helped cement his popularity and he became friends with many celebrities, including Eugen Sandow.

Hit songs such as ‘The Coster’s Girl’, ‘Pretty Polly’ and ‘You Can Find Another Sweetheart, But Not Another Mother’ to rapturous audiences up and down the land, as well as abroad like his popularity in Australia were sometime supported by Lloyd, who joined him on a trip in 1904.

King of the Costers marries the Nation’s Sweetheart

This was the beginning of a relationship that would outrage the establishmen. She was an established and married music hall singer who was married to a ticket tout by the name of Percy Courtenay. Abusive, unreliable and seemingly a drifter, Hurley offered Marie the stability she needed.

His marriage to Marie on October 27th 1906 was a raucous day. Held at the Hampstead Registry Office, commentators said the day was ‘robbed of its dignity’ by the bawdy conduct of the wedding party. Innocent outbursts such as Marie interrupting his speech where he referred to ‘my wife and I’, only for her to bawl out:

‘you should say Wife louder!’

…gives painful clues that this relationship was destined to leave Alec a broken man. Her songs captured the public in a way his never did; undoubtedly he was proud of his wife but increasing time apart and the ascension of her career placed the relationship under a terrible strain.

Beginning of the end

He came home after a tour he was appearing in (performing ‘Cockney in Japan’) to find their marital home in Primrose Hill completely devoid of furniture. She’d decamped to the Midland Hotel to build a love nest with a 20 year old Jockey by the name of Bernard Dillon, who was best man at her daughter’s wedding. 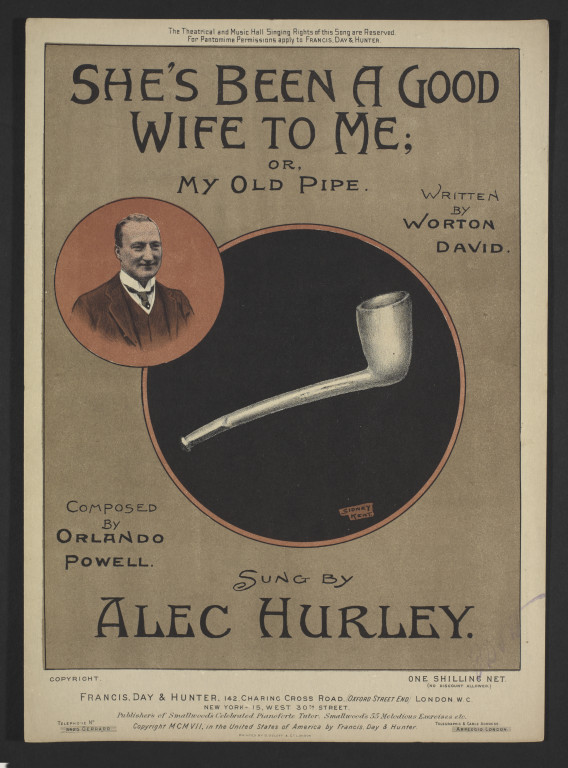 From this point on, Hurley’s life began to falter. He spiralled into debt – appearing in bankruptcy court in 1910 where his gambling habits, court case costs and failing health were severely impacting his income. He moved to Jack Straw’s Castle in Hampstead Heath, where he was often seen jogging – yet his heart still yearned for Marie.

It’s funny in a way that both Alec and Marie died in similar circumstances – sheer exhaustion, helped in no small part by the demon drink. A performance in Glasgow had him taken ill and after coming home to recuperate, he died a week later of pneumonia in 1913. His funeral was made all the more poignant by his Irish Terrier, Mike, haplessly sniffing around the grave trying to see where his master had gotten to.

Lloyd ended her days in a similar fashion; exhausted, knackered, abused by her jockey toyboy and her once captivating performances reduced to staggering around a stage. Her funeral in 1922 saw thousands flock to Hampstead Cemetery; Alec’s had a close knit band of entertainers – The Grand Order of Water Rats, other comedians and entertainers, standing at a plain grave now hidden amidst countless others.

This one’s for you, Alec.