Many people who lie in our cemeteries would have known, even visited, one of London’s best known animals.

When I was about 7 or 8 I visited London Zoo for the first time. This was back when elephants and rhinos were still being kept in central London, which, considering it was the mid-1990’s, is bewildering. I clutched my blue guide book and remember looking at images of famous animals that had lived there over the years. There was an elephant, a gorilla and an owl. But I was captivated by a sepia image of a hippo. It entranced me.

This was Obaysch. Everyone went to see him.

Obaysch (pronounced Obash) was the first hippopotamus to be seen in Britain since Roman times and he was obtained by the London Zoological Society, who, in the spirit of Swap Shop, traded a few deerhounds and greyhounds with Abbas Pacha, the Ottoman Viceroy of Egypt. Caught aged only 3 days old specifically for the purpose, his name comes from the river in which he was captured in 1849. He allegedly caused a milk shortage in Cairo as he was overwintered there in preparation for his arrival at London Zoo. 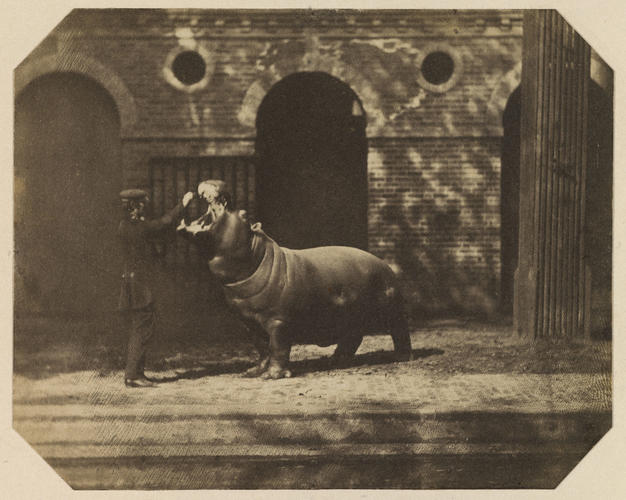 Obaysch being fed: via the Royal Collection Trust.

Why was he such a talking point?

The time he was imported was a time of great excitement and interest. As he arrived in May 1850, the Great Exhibition was in its final stages of preparation; the Koh-i-Noor diamond had just been presented to Queen Victoria and David Copperfield was published in its complete book form. 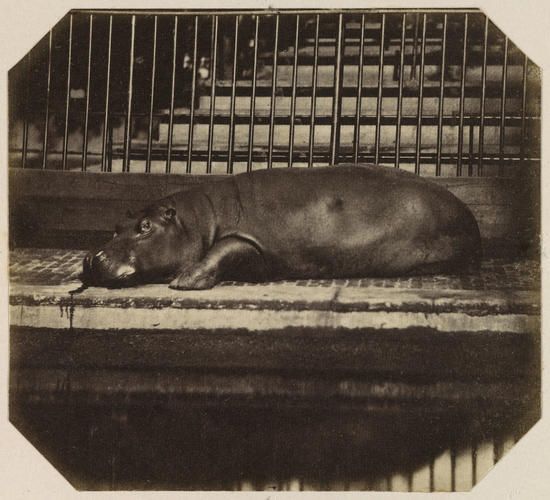 Obaysch in the Hippo House, via the Royal Collection Trust.

People were amazed at this bizarre looking animal. Charles Dickens called him ‘the Illustrious Stranger’ upon first seeing him, whereas other names for him included ”aquatic pig‘, ‘unique monster‘ and Punch’s ‘HRH (His Rolling Hulk)’. There was an affable charm to his character – when he arrived, his keeper (who he was inseparable from) dangled some dates over his shoulder and the he trotted merrily after his keeper, licking his lips in mouth watering delight.

Such was his appeal that visitor numbers to the gardens rose from 168,895 in 1849 to 360,462 the following year. His popularity inspired memorabilia, trinkets and an annoyingly catchy Victorian tune which was very popular in the dining rooms of London. More info on a mystery that’s perplexed me concerning the music is available here. Sweet music for an adorable little hippo.

Cute as a youngster, a demon as an adult

Such sweetness sadly vanished as he grew older. When he reached maturity, he was a cantankerous old thing, with a hatred of his keepers. Once he escaped and a poor zoo employee he took a particular gripe against was used as a lure to get him back into his pen.

In a startling tale of animal husbandry, the Zoo Director Abraham Dee Bartlett saw that Obaysch was suffering from toothache. From the other side of the enclosure’s railings, Bartlett yanked on the offending gnasher – unsurprisingly, this caused Obaysch an awful lot of pain, so he wriggled free and started to charge the bars in protest. Two more attempts at tooth extraction got him so enraged that the final charge nearly ripped the ironwork out of the brick! The tooth was successfully removed, however.

By 1854 it was decided that he needed a mate, so Adhela, better known as ‘Dil‘, became his consort and first female hippo seen in Britain since Roman times. It took 16 years before any live young were successfully reared – two calves died but a female by the name of Guy Fawkes was born in 1872, on the night where she gets her name from. They didn’t realise ‘he’ was a ‘she’ until a few months later.

This merry bloat of Hippos lived in the small enclosure, although Obaysch was initially kept separate from Dil and their baby daughter. The decision was made to curtail Obaysch’s solitude and for the three hippos to live together and gingerly, his daughter approached him. Dil, the ever protective mother, didn’t like Obaysch’s initial reaction to their offspring, so she charged at him – which saw Obaysch ending up head first into the pool. Go, girl!

Guy Fawkes grew to be even bigger than her father.

What happened to him?

Other animals arrived as the years went on – Jumbo the Elephant was stabled a short walk away, who ended up eclipsing him in terms of popularity upon his arrival in 1865. Obaysch lived until 1878, achieving the accolade of being not only the first the first hippo in Britain since Roman times but the first adult one to die in Britain, too.

His body was sold for £15 (£1605 in today’s money) to Edward Gerrard, taxidermist of 54 Queen’s Road, Camden Town. Gerrard was the taxidermist for the Natural History Museum but also worked privately, too. I can’t find where his remains currently are – the NHM had a bonfire in the 70’s with a lot of their mounted specimens as they were seen to be bad taste, so fingers crossed London’s earliest animal superstar is stored away securely. Perhaps you, dear reader, know where he ended up?

Nowadays large animals are kept at ZSL’s sister site in Whipsnade and by visiting the Giraffe House today, nothing betrays the presence of what was once one of London’s best known animals.

My thanks to Sarah Broadhurst from the London Zoological Archive for her assistance in the research for this post.

2 thoughts on “HRH (His Rolling Hulk)”