The National Cemetery That Never Was

Primrose Hill offers one of the most beautiful views of London.

I fulfilled an ambition recently when myself and the other half walked up its steep hill and saw the twinkling lights of skyscrapers, constructing cranes and houses. It was a view that ensured admirable silence from those who were also sharing our view – alongside Hampstead Heath and Highgate Hill, it’s a vista you should try and see for yourself.

But we very nearly lost it. This idyllic hill was once going to be a cemetery of national importance.

A National Place of Rest

Let’s turn the clock back to the 1830’s, where London – the nation, even – was in the middle of a war. The dead were killing the living. Festering, cramped churchyards were poisoning water supplies, attracting vermin – some burial grounds glowed blue at night and were a nauseous mix of soil, gas and rotting flesh.

George Frederick Carden, the cantankerous 24 year old barrister who saw Pere Lachaise in Paris and thought ‘yep, we’ll have that here, k thnx BYE‘ petitioned Parliament three times before Kensal Green, the first of the garden cemeteries, was eventually opened. But there was a plan for an even more radical idea that would have created a national place of mourning and forever changed one of the key areas of London.

So you had this ring of seven (technically eight, but let’s not get bogged down with details) cemeteries in London which had opened to offer a welcome and inviting place for the London dead to sleep forever more, and provide spaces for the likes of me, Flickeing Lamps and the London Dead to walk, tour and write. Hooray! Wonderful. But some were unconvinced of their long term sustainability.

But we had the cemeteries, though…?

Public health reformer Edwin Chadwick had the foresight to realize London would grow. Old burial grounds such as Bunhill Fields and Postman’s Park were closed by the early 1850’s and one day even the likes of Nunhead and Tower Hamlets would become full. Their opening was a step in the right direction, but it wasn’t enough.

Various plans were mooted. Kensal Green was to be expanded and serve all of west London and an equally big cemetery in Abbey Wood would cater for everyone in the east. But an idea that held sway for a while was a huge catacomb which would receive Londoners for hundreds of years, until they eventually became one with the earth. This being a Victorian idea, one thing was overlooked – everyone would have been in triple lined lead coffins in a building made of brick and stone – hardly going ‘back to the soil’, is it?

A Visit to the Grand National Cemetery, April 1st 2000

Expectations of what was being regarded as an outdoor area that unified art, sculpture and people in a way no cathedral ever could. Why not put it on a hill with a lovely view? It worked for Highgate. What a selling point that would be. Tried, tested, proven to work.

Obviously the writer wouldn’t know of the marvel of Liberty X and Busted, but what an insight into a future vision of the city – the decay of the cemetery seeping out into the Pompeii-like surrounds of Primrose Hill. Animals breaking out of London Zoo in the 1950’s, the grounds lit by gaslight. 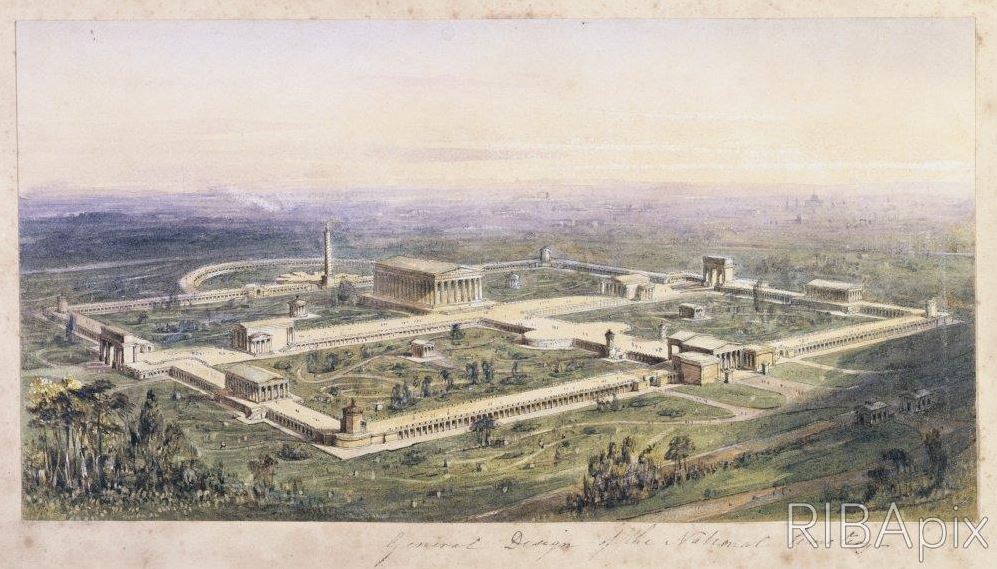 The mausoleum went through several iterations, a sprawling classical parkland akin to the colonnades of Brompton which would have been one hundred and fifty acres in size. It had the support of the likes of Scottish journalist William Jerdan.

Another idea, dating from 1820 by Thomas Wilson, subscribed to the thirst for Egyptian design of the time was a pyramid which would have held 5,167,104 bodies in several thousand vaults. Officially known as the Metropolitan Sepulcher, it would have been a dizzying 950 feet high, which is almost as tall as the Shard.

94 storeys of vaults, and accommodating 40,000 bodies a year (a number which prospective investors found very hard to believe) with the upper floors  a mixture of residential apartments; an observatory was to be at the very top. It probably would have had a Starbucks up there too, were they around back then!

Well, nothing, because Primrose Hill is still a hill.

Cost was a deciding factor. Most of the cemeteries were not as profitable as the shareholders would have liked – Brompton famously becoming state owned barely ten years after opening, so fancy classical cemeteries with umpteen temples or towering gothic spires wouldn’t have stood a chance.

The pyramid idea was financially a bit suspect would have cost £250 million is today’s money and taken decades to construct; let’s not forget that the Houses of Parliament by Charles Barry and Augustus Pugin, modest in size in comparison, took nearly twenty years to build. 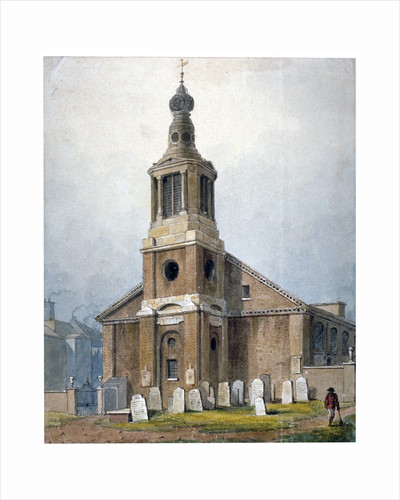 The essayist William Hazlitt (himself buried in the overcrowded churchyard of St. Anne’s, Soho) on reviewing the Pere Lachaise influenced designs for a national cemetery, stated:

“…nor do we think that the sentimentality of the French, is communicable by means of tombs or temples or gardens to the English, who prefer to indulge their sorrows in domestic privacy’.”

There really wasn’t much of an appetite for it. The cemeteries we have did the job, and the company that formulated the idea of a national cemetery went on to open what was once the largest in the world (and one I’m yet to visit) – Brookwood.

It does make you wonder what a national cemetery would be like if it had actually been built. But then we’d have been robbed of one of the great gems of outdoor London.

One response to “The National Cemetery That Never Was”