This post was written by cemetery tour guide and researcher Sam Perrin.

It’s a gorgeous old mansion that could easily double as the set of a whodunit murder mystery with links to St Pancras Station, as well as being the site of a daring wartime escape!

Built by Francis Wright as a wedding gift to his son, Fitzherbert (as one does), construction commenced in the 1860s and the sprawling home was finally completed in 1909. Francis was a forward-thinking industrialist with interests in the Butterley Company, an iron production company responsible for the first Vauxhall Bridge over the Thames.  Butterley also extracted coal and was producing enormous amounts of the stuff by 1862.

Wright was savvy and realised the Midland Railway Company, also under his directorship, had no direct route into the increasingly congested Euston Station and was in dire need of expansion.  So the Midland Railway purchased land north of the Regents Canal (flattening Agar and Somers Towns, considered two of the worst slums in north London, and clearing St Pancras Churchyard in the process) to construct a goods terminus and in 1868 secured the contract for designing and creating the roof of St Pancras Station.  It’s hardly surprising that the beautiful blue arched ribs of St Pancras and the arches in the conservatory of The Hayes bear a resemblance – they were both created by Wright’s Butterley Company.

Fitzherbert resigned from the Butterley Company due to ill health and retired to the coast where he died in December 1910. His son, Henry, lived elsewhere and it was around this time that a fledgling company, First Conference Estate Limited, a collective of Christian societies and organisations, just happened to be looking for a site similar to the permanent venues used for Christian student conferences in the US.

The Hayes was perfect for the company’s needs and was purchased from Henry for £11,500, a fraction of what it cost to build, with parts of the original house redeveloped to have additional accommodation facilities. Henry was appointed director of the company and there he remained for the next 12 years.  Business was good until the outbreak of WWI when the site was used as army barracks and residence for evacuees from two London girls’ schools. Post-war, the company expanded – purchasing property in Hertfordshire to add to its portfolio, extending its services to host functions like wedding receptions. In 1920 Henry severed the Wright family’s connection with The Hayes after he resigned.

WWII is when The Hayes’ history gets really interesting. The site was acquired by the War Office and was initially used to accommodate British troops but was later converted into a “Detention Camp for Aliens”.

It then became a POW encampment for German air force officers known as Camp 13. Two of its first “enforced guests” were Luftwaffe Major Heinz Cramer and fighter pilot Franz Von Werra, the latter of whom had previously escaped from Grizedale Hall in the Lake District by climbing over a wall during exercises.

Unsurprisingly, the prospect of escape came up again and the pair recruited another three men to join them: Walter (Manni) Mannhart, “Doc” Wagner and Hannes Wilhelm. The five prospective escapees even earned a rather droll nickname courtesy of Von Werra: “Die Swanwick Tiefbau AG” (“The Swanwick Construction Company”).  In November 1940, they began digging a tunnel from the Garden House, depositing the superfluous sand and clay anywhere they could to avoid detection. 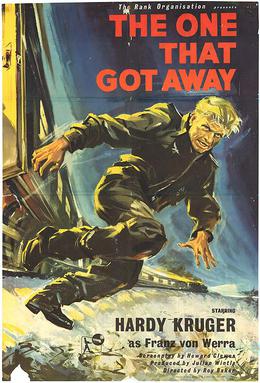 They dug for over a month and on 20 December 1940, finally broke through the soil behind a tree to freedom. But their collective relief was short lived as all five men were eventually caught and returned to Camp 13 and later transferred to Canada, where Von Werra finally did evade his captors by jumping from a train and eventually crossing the border into the U.S. His exploits were immortalised in the 1957 film “The One That Got Away”, starring Hardy Krüger. The tunnel is still in existence but isn’t accessible and in the 1990s, one of the original German POWs, returned to The Hayes for an emotional visit.  Heinz Mollenbrok, a Luftwaffe pilot, said,

“It was the best place in the world during the war… it’s the first time I have been here in over 50 years but when I looked up and saw the building, I instantly recognised it. I saw the window of the room I stayed in”.

The Hayes is now a conference centre and the original house is flanked by two magnificent Cedar of Lebanon trees, commonly imported as status symbols in the gardens of stately homes. And something I especially liked is that the area surrounding the lake is a memorial garden (below) with plaques and ashes interments of now deceased staff members who worked there so tirelessly over the years.

Many thanks to Olive and Joe from The Hayes for enduring all my questions.

View all posts by misssamperrin