Skip to content
Posted on February 18, 2019 by Sheldon K Goodman

For LGBT History Month 2019 I’m inviting friends and fans alike to delve into our cemeteries and unearth some queer stories – there are loads, if you know where to look! Today I’m very pleased to post a blog by Sean Curran; Sean is a heritage educator and curator currently Community Learning Manager at the National Trust’s Sutton House and Breaker’s Yard.

For those of us in the heritage sector, and with interests in LGBTQ histories, two significant things happened in 1895. In a barbaric and shameful chapter of our history, the trial of ‘posing somdomite’ Oscar Wilde that resulted in his imprisonment for ‘gross indecency’ took place, and just months before, an altogether more wholesome thing took place when the National Trust was founded.

The National Trust is the largest membership organisation in the UK, and owns over 600,000 acres of countryside and 775 miles of coastline. It is perhaps more often thought of in terms of its historic buildings, those grand crumbling piles, still occupied by aristocratic families, with lavishly preserved rooms bigger than most people’s houses cordoned off with red velvet ropes.

While arguably miles behind the museum world, in the manner in which the Trust tells its stories in transparent and meaningful ways, the last few years have seen major eventual steps forward in addressing some of the previously obscured histories of women, LGBTQ+ people, people of colour, working class people, and the colonial stories in its properties and landscapes. For many of the more traditional membership, this might seem like a radical departure from the Trust’s core values, but a quick glance at its founders’ motivations would quickly dispel that, and suggest that the Trust’s slow move towards relevance is in fact a return to form.

In spite of being synonymous with the care and protection of stately homes, the three founders of the National Trust, Octavia Hill, Sir Robert Hunter and Hardwicke Rawnsley, originally established it to protect green spaces. In its first ten years, the Trust had acquired just ten houses, the first of which was Alfriston Clergy House in East Sussex, a move likely only prompted by its close relationship to the William Morris founded Society for the Protection of Ancient Buildings (SPAB).

It is the youngest of the three founders I want to explore a little more fully. Octavia Hill was born in Wisbech, Cambridgeshire in 1838. Her mother Caroline Southwood Smith was daughter of Dr Thomas Southwood Smith, a sanitary reformer with a keen interest in public health and poverty related diseases.

Her father, James Hill, a corn merchant and banker, was declared bankrupt when Octavia was just two, so she grew up in a home with little money, of low rank, and with no formal schooling.  The family later moved to northwest London and Octavia was accepted into a guild for ‘distressed women’ when she was in her teens, and she quickly took charge of the work room making toys for children at ragged schools. As a child, Octavia would refuse to take sugar, as it was a product of slave labour. She became preoccupied with the plight of the poor in the Victorian period. She later went on to develop housing schemes that homed thousands of poor people in the late 19th century.

In her 1875 book, Homes of the London Poor Octavia Hill contends that the primary concern for the poor is space, and that they have nowhere to go to escape their own deficit of domestic space. While housing was a great concern for Octavia, she believed that a house was something to be earned, whereas access to common land to share with neighbours should be a right regardless of income. She believed that green spaces should be local and free, or at least cheap, to access. She is also credited with coining the term ‘green-belt’ and fought diligently to avoid its urbanisation. Her grounds for campaigning for the protection of green spaces was in order to benefit people, rather than just for the sake of preservation, or in opposition of industrialisation. She firmly believed that grass should be trodden on ‘it will grow back’.

It’s understandable that many today feel that the National Trust is not necessarily about providing free (or even cheap) access for poor people to beautiful places, unfortunately the Trust is a membership organisation, and completely independent of the government, and its membership largely represents more affluent people.

This membership is a double edged sword, because while it helps hugely in supporting the expensive work for caring for hundreds of thousands of acres of land and hundreds of buildings, it also means that everything that the Trust does is held under extreme scrutiny by its 5.1 million members, who are not necessarily representative of the 60 odd million who live in the UK, much less the people who are most likely to have a deficit of space of their own. Octavia Hill’s radical approach to access sometimes feels like a constant uphill battle for the Trust to achieve.

Octavia’s approach to heritage and access were not her only remarkable traits. Like with any historical figure, Octavia’s sexuality is contested, but I stand firmly by my belief that to claim that someone from history could be considered LGBTQ+ in contemporary terms, is no more controversial than claiming they were heterosexual. In Octavia’s case, there seems to be a lot more evidence to suggest the former. A large reason why many independent Victorian women’s queerness is repudiated by some historians is because many women of the time rejected, or showed little interest in marriage or men, and had particularly close relationships with other women, that could be considered purely platonic.

While I resent the idea of having to provide ‘evidence’ to prove that historical figures may have had same sex relationships, as it assumes that heterosexuality is the default, queer historians often have to creatively interpret, or read between the lines of historical sources and records, as for many understandable reasons, traces of queerness in history were very intentionally not left behind, or indeed destroyed. There is, however, in Octavia’s case, a sound record that she shared a romantic moment with another ground breaking Victorian woman.

Dr Sophia Jex-Blake was part of the Edinburgh Seven, the first group of women to be enrolled as undergraduates at any university in the UK. She was one of the first women doctors and was a crucial figure in changing legislation to allow women to study medicine. Her partner was Dr Margaret Todd, and they lived together following retirement until Jex-Blake’s death.

In her twenties, Jex-Blake had lived with Octavia Hill, and in a diary entry from 1860, she recalled how Octavia had ‘sunk her head on my lap silently, raised it in tears, and then such a kiss!’ Hill described their relationship as ‘great companions’ in a letter to a friend, though biographer Gillian Darley seems at pains to assert that theirs was a ‘celibate friendship’, which seems an odd adjective for a friendship. The true nature of their relationship, long before Jex-Blake met the woman that would become her long term partner, will likely never be known, but it seems to have ended rather tempestuously, with little contact between the pair until they both died within months of each other in 1912.

A more lasting relationship for Octavia Hill, would endure over 30 years. Following a spate of ill-health, Harriot York was engaged as Octavia’s companion in 1878. The two lived together until Octavia’s death, and travelled extensively to get away from London life. Octavia’s most well known likeness is the one painted by John Singer Sargent in 1898, Harriot was not impressed, noting that the sideways glance depicted was atypical for Octavia, whose dark eyes were more likely to return a penetrating direct gaze. As well as handling practicalities such as cooking, which allowed Octavia to recover her health and continue with her work, York’s companionship relieved Octavia of the loneliness he had felt so deeply prior to their meeting. York was known as the ‘keeper’ to Octavia’s ‘lion’.

When Octavia died at the age of 73, her will raised some eyebrows, chiefly of those who were surprised by and suspicious of her wealth. It seems more likely that her wealth was a result of her frugality, and that in fact it was her companion, herself from money, who bore the financial outgoings of their life together. She left the contents of her residence to Harriot. Harriot York died 18 years after Octavia, at the age of 87.

Much like the many Victorian women and their companions, much can be said about the nature of their relationship, but as with most close relationships, only those within it could ever attest to whether it was a platonic or a sexual one. I intentionally don’t use the word romantic in opposition to platonic, as often queer people today have less rigid distinctions, and for many the people we surround ourself with who are like us, are as important, or more important in affirming our own identities than those we have sex with. 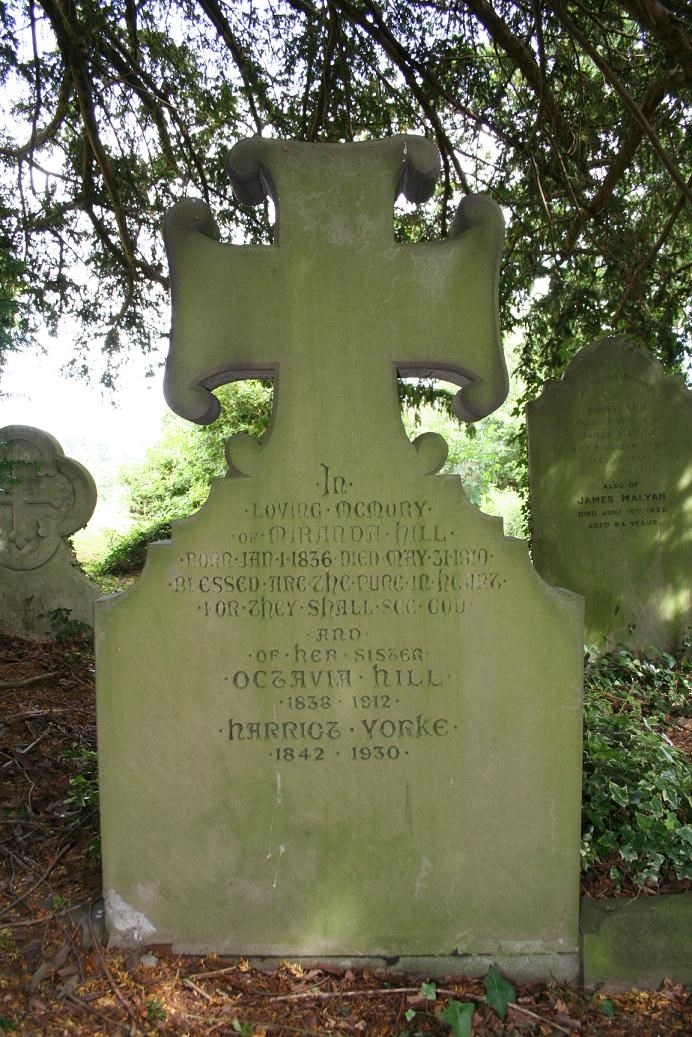 Many believed that Octavia Hill should be laid to rest in Westminster Abbey, such was the enormity of her contribution to the lives of poor people in London and beyond, and while her fellow National Trust founder Canon Rawnsley led a public service for her at Southwark Cathedral, she was buried elsewhere. She opted instead to be buried under a yew tree at Holy Trinity Church in Crockham Hill with her sister Miranda, who had died two years later. As per Octavia’s wishes, when Harriot died, she too was buried with them.

One thought on “Octavia Hill”