Say the sentence ‘I’m looking for the Sausage King’ and you’ll get responses like ‘I’ve seen him on Grindr’ ‘so am I, dear’ or ‘I like how honest you are’.

The one I’m referring to  is one of the most eccentric characters of ye olde London, whose story has particular pertinence as recently it’s been announced that the historic Smithfield Market (sausage epicentre of London) is threatened with relocation after eight hundred years.

The market, where big bags of bullock’s bollocks and sizeable sacks of sheep-y sustenance are available for all to buy at stupidly cheap prices. Much of the meat here ends up in the restaurants of London as much as it does in people’s home freezers. It was this market that once provided our meat mogul with his goods and business.Now, he’s in a cemetery in Tooting, far away from his Smithfield court.

A humble Pret is where our story begins.

From Smithfield Circus, walk through the beautiful colonnade of the Grade II listed market building and you’ll be confronted with an elegant bricked building. Look up and you’ll see a giant boar that’s been carved into the stonework of the building. This is the mark of William Harris, the Victorian era’s self-styled ‘Sausage King’ and from his shop on the ground floor, wearing an opera hat, dinner suit and diamond pin in his cravat, from behind his counter he ran his food empire.

The Victorians loved an eccentric and whether it be him dressing entirely inappropriately for his job or riding a pig from Brighton to London (with the words ‘tomorrow’s sausages’ written cruelly on its back), Harris was the master of self promotion and he regularly staged stunts to further his image and his brand. Imagine if he had Snapchat?

A butcher’s boy from Woolwich who was born in 1843, he opened his first stall in Newgate Market where his alternative style of promotion was already gaining the interest and mirth of local traders. He secured a lease from St Bartholomew’s Hospital for a fifty years; in 1896 he rebuilt his premises using the bloke who designed Leicester Town Hall.

It’s hard to sift fact from fiction when it comes to looking at details of his life, but tales such as challenging a man who stole a whole line of sausages from his shop in Brighton to an eating contest (the idea being that if the thief ate more than him, no charges would be brought) and naming all his sons ‘William’ (instead referring them as number 1, number 2, number 3 etc). He truly was the king of his own little world. 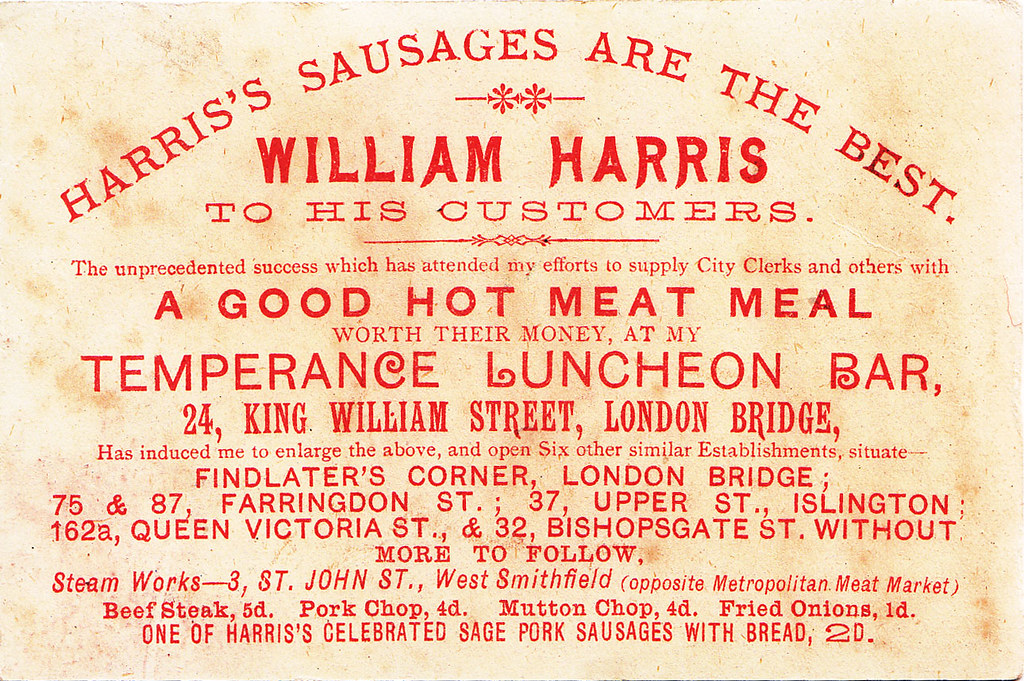 The latter tale, which extended to his daughters, who were all named Elizabeth (but thankfully had their own nicknames), had a weird tale when the local authorities in the 1880’s brought him to court for not sending his son to school. ‘Which one?’ he asked as he brought all three into the room; everyone fell about laughing.

Yesterday’s Chip Paper, who like me cannot even deal with his moniker, made a good point regarding this which I see a lot in the archives; it appears that he was followed by canned laughter. He was also in court a fair bit too; from overcrowding the street outside his shop in the Strand (it had a magic lantern show featuring images of the Royal Family) to refusing to pay the poor rates in 1896; he’d often reduce the session to fits of hysterics.

Harris was a frequent benefactor to charities and the local Police; all officers who worked near an establishment of his would get free sausages every Christmas. One person who didn’t seem to benefit from this philanthropy was his first wife, who was found near death and virtually destitute in Charterhouse Square in the 1880’s; there seems to have been a period of estrangement and it was reported at her inquest that despite maintaining a regular retainer to her, she was often found in want. It’s interesting too to see a number of former employees tried to embezzle or rob him; one even pulled a gun on him. One wonders the true operation of his business in this regard.

According to ‘The Caterer’ in 1884, he provided nowhere to sit for his patrons – standing room only; utilising a narrow ledge where people would stand to eat chops, beef steaks and his sausages amply garnished with onions; he estimated he served nearly two thousand people a day. In today’s terms the sausage ratio would be like G-A-Y on a Friday night and it must’ve functioned like people receiving communion at the altar rail, but several times faster.

His ambition for the humble sausage had him provide them to the British, American and Japanese forces and in conversation with an American journalist, stated that he wanted to open branches across the universe with the help of his children, who all bore his name.

‘In this manner I hope to spread a network of W. Harris and one of these days, if ever one of your great, great, very great grandchildren happens to be in Timbuktu or Yokahama – he may visit the establishment of William Harris number 999, who will doubtless assure you that Harris’ sausages are the best!’

Echoing a similar thing that happened with the Willy Wonka of retail in Bayswater, the King’s death in 1912 had him interred in the family grave in Tooting. The business passed to the Sausage Prince of Wales (good grief, this keeps going); this being William number 2. Perhaps lacking the spark their father had, the business lacked the punch of the founder and was wound down in the 1960’s.

I was intrigued to see exactly where he ended up: Tooting was too vague a description. Which cemetery? So many stories in archives and newspapers simply list the date of their funeral and nothing more. Nope. I wasn’t having it. I wanted the definitive end to William’s life and the exact location of where he ended up.

Through the wonderful British Newspaper Archive, I found out his funeral was held at St Sepulchre without Newgate – which make sense, seeing as it is just down the road from his old premises. But where next? I consorted with the Lambeth Archives and went through endless rolls of microfiche looking at the records of the cemeteries they held on file.

Nothing. I’d come all the way from Croydon to Lambeth for seemingly nothing. Then I tried the last remaining microfiche – after about twenty minutes of scrolling, I let out a ‘FUCK YES!’ – I apologised at the time to the startled librarians and I’ll apologise again now. Jackpot. Thursday 18th April, 1812. Section D1, Private Grave 223.

The Librarian handed me a map of the cemetery and, unable to contain my excitement, I ordered an Uber and headed straight for the cemetery. I’d been warned that a lot of clearance had happened in the 1960’s and that his grave may have gone: it was indeed clear a lot of tidying up had happened as the years had rolled on.

But. But. Although a lot of the grander graves had been cleared away, one (not too far away from Dan Leno, as it turns out) stood proud.

So many miles from Smithfield but now his story can live on through local historians. I’m so glad I found him!

3 thoughts on “Chief of the Clan McSausage”