Standing down the Old Bailey in the 1860’s would have been a very different experience.

Its legacy lives on in prose and artefacts – one of my favourite exhibits at the Museum of London is a door from the infamous gaol that formerly stood on the site of the current Central Criminal Court. For me, I ogle it every day as I walk from work by the legendary Viaduct Tavern to get my Sausage and Egg McMuffin from Maccie D’s on Ludgate Hill most mornings. History on my doorstep with this post, although apologies in advance, it’s a bit of a grim read…!

Amongst its romantic tragedy, the likes of Pennysylvania founder William Penn, highwaywoman Jane Voss and Captain Kidd were all imprisoned in the terrible Newgate Prison. Some inmates however remained, long after death.

Public executions here used to be a big draw and from my own family, listening to the radio listening regarding announcements of people being hanged over the wireless in the 50’s was almost like settling down to binge watch the latest season of Queer Eye.

In the 19th century, Newgate hangings were supposed to be the more sombre version of the punishment that happened at Tyburn, the nearby St Sepulchre (which would, decades later, later hold the funeral of the Sausage King) tolling throughout proceedings to emphasise the sombre mood.

Encouraged by the improved accessibility of the area from the Metropolitan Line which stopped at nearby Farringdon, people flocked to the the scaffold and the party atmosphere at the death of Fenian Michael Barrett, who was the last public hanging when things were moved indoors, played out infront of jubilant spectators who revelled in the macabre display.  It’s reported that spectators belted out ‘Rule Britannia’ and ‘Champagne Charlie’ as he swung for a crime he didn’t actually commit.

Once they’d been cut down, they would then be taken back into the prison where their incarceration would continue. 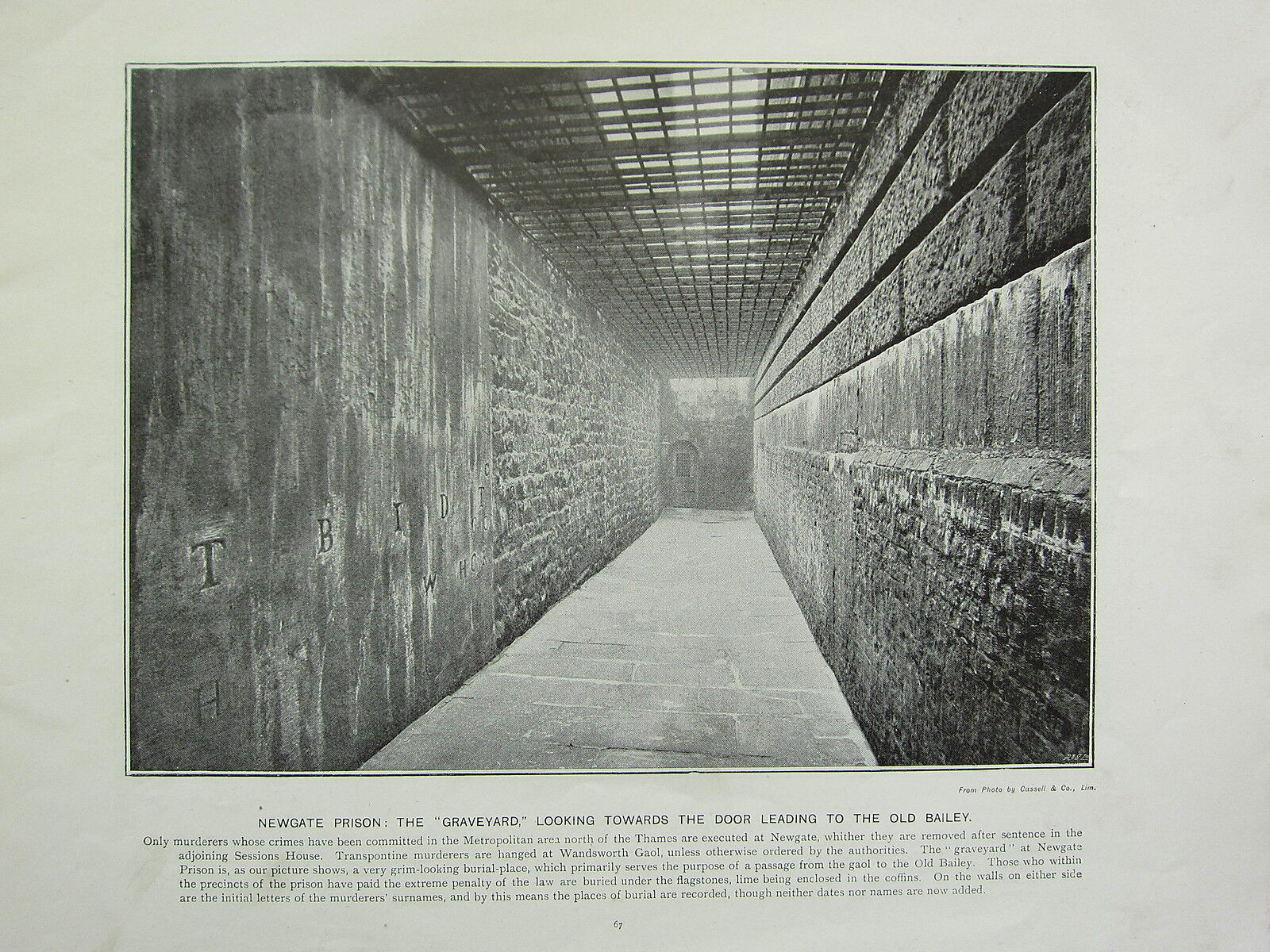 How would it continue?

Towards the rear of the prison was a narrow passageway, which prisoners would take to the court building next door. Severe, dark and hardly the kind of corridor you’d walk down willingly, it was ‘affectionately’ called Birdcage Walk on account of its latticed iron roof.

Look closely at the above image: photos of the time show five letters prominently carved into the walls: T B I D T. Unbeknownst to the vagabonds who walked down this corridor, those letters were the scant epitaphs of those who’d encountered the noose before them, their bodies crammed underneath the flagstone paving. The bold letters are the initialed surnames of the Cato Street conspirators, who were executed, decapitated and then buried here after a botched attempt to assassinate Lord Liverpool.

Soon the practice of engraving initials (and occasionally, the date of death) was abandoned. The quicklime made light work of the bodies and it was used as a place of burial for the likes of Henry Wainwright who murdered his 23 year old mistress in 1875. after becoming fnancially buggered from supporting the family he had with his wife and the illegitimate children he had with his lover. The case got more press attention than the Ripper murders did a decade later allegedly and Gilbert (of Gilbert and Sullivan, no less) acted as junior defence for Wainwright, as he wanted to dodge jury duty.

Another person placed here was Franz Müller, the first man to murder someone on a British train. It’s because of his actions that train carriage design was modified to allow corridors and eventially aisles, as well as allowing the installation of the emergency cord to provide an escape route from any wannabe Müllers.

As the present Central Criminal Court was built, over ninety skeletons were exhumed and reburied in a plot in the City of London cemetery, a simple plaque affording them little more recognition than they had when they were first interred.

Also known as Dead Man’s Walk, the site is now lost within the newer building. A place of rest few Londoners ever saw – which is hardly surprising really, as those that did mostly ended up joining the countless number forgotten under that dreadful stone floor.

And now I’m off to get my Sausage and Egg McMuffin.

One thought on “Dead Man’s Walk”