Dressed in the highest fashions of the 1860’s, a princess looks deeply into the camera as she takes direction from one of London’s busiest photographers.

Surrounded by foliage and the ‘shelter’ of a tree with a classical column in the background to accentuate her status and class, effortlessly exuding a regal command that was only beaten by Queen Victoria herself. But there’s a notable thing about this photo. Princess Sara herself. She’s a woman of colour in a book of white faces.

The above image would have been incendiary to some in the 1860’s and to me it has the potentcy of the image of Lady Phyll – and were it not for her connection to Her Majesty she would not have been dressed in such finery, neither standing in the finest photographic studio of Bayswater nor actually been in England at all.

Sara’s photo is remarkable as it’s a stand-out image from the daybooks of French photographer Camile Silvy. I’m going to deal with him in a future blog post, but Sara’s story is worth knowing as cemetery stories do concern themselves with the live sof hite Victorian men. Despite the luxuriousness of her life: an affluent black woman who was accepted by the establishment and was lucky enough to enjoy its privileges and protection, she lies in a  grave in Portugal: until recently her grave was unmarked.

Sara was born in 1843 in Oke-Adon, growing up in relative peace. This was not to last however as the Kingdom of Dahomey, now modern-day Benin, invaded in 1848 and executed her parents – aged five she found herself orphaned, alone (she never worked out what gappened to her siblings) and a slave in the court of King Ghezo.

Sara was intended as a human sacrifice and were it not for the efforts of Captain Frederick Forbes, Emissary of the Royal Navy  to offer her (offer her!) to the Queen she would have been killed. A present from the ‘King of the Blacks to the Queen of the Whites’. God, there are some bloody shameful aspects of our past.

Forbes decided to rename her. Sara Forbes Bonetta, the surname being that of his ship. She was brought to England and treated as much as a commodity as Obaysch was to London Zoo several years before: her beauty, although admired, was also harshly conveyed in native African clothes to heighten and chronicle the reach of the empire. 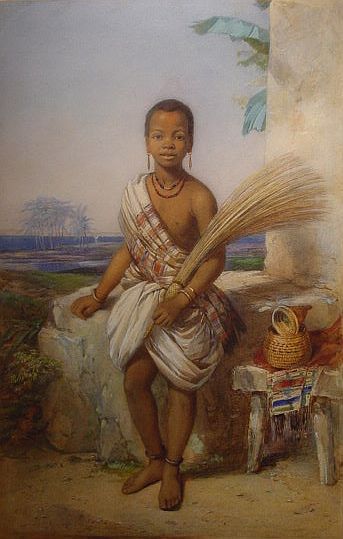 Sara painted by Octavius Oakley, who was known for painting members of the Travelling community. Here she was titled ‘The Dahomian Captive’.

She met Victoria in 1850 who was immediately struck by how clever she was, even remarking so in her private journal and happily paid for her schooling through the Church Missionary Society. However, the British climate (packed with pollutants and inclement weather) put a strain on poor Sara’s health and so it was decided that she return to Africa to attend the Female Institution in Freetown, Sierra Leone the following year. This would not remove the lasting damage the climatic differences had: she would be burdened with a cough that would remain with her until her dying day. 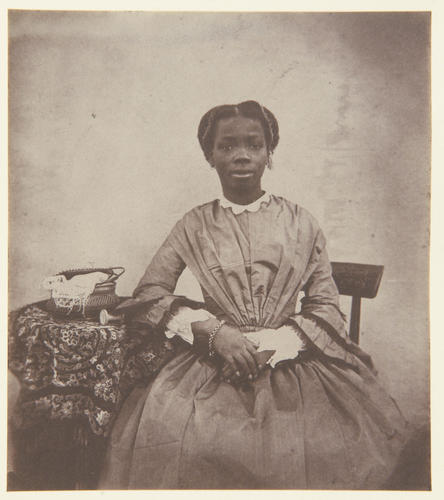 Sara thrived, no doubt bolstered by the patronage of our second longest-reigning monarch and was a frequent visitor to Windsor Castle. In 1862, a thirty-one year old Yoruban businessman and former slave by the name of James Pinson Labulo Davies proposed to her and although she initially declined, Queen Vic (who loved meddling in the affairs of other people) insisted that she marry him and alongside the blessing of Miss Welch who she was living with in Brighton, was duly wed at the church of St. Nicholas where she had sixteen bridesmaids.

Married life heralded a return to Africa and a family of her own: Victoria was enamoured with her children as much as she was with their mother: the couple naming one of ther brood after the regal matriach of the British Empire. The family settled in Lagos where her husband became a member of the Legislative Council between 1872-74. Such was Sara’s importance that, alongside herself and Bishop Samuel Ajayi Crowther,  were there ever an uprising in Lagos they would be the only ones who would be evacuated to safety.

Her End in Funchal

Her cough however grew worse as time wore on – she never fully acclimatised to a British climate and eventually she died of Tuberculosis in 1880 whilst recuperating in Madeira, Portugal. Victoria was shocked – herself no stranger to loss considering her husband and several of her children had predeceased her. She was buried, as I mentioned earlier, in a plain grave in Madeira which until recently had no offical commemoration of this African princess.

To peruse the daybooks of Camile Silvy, as I have done many, many evenings and to happen across her image is like being struck by a thunderbolt. Sara enjoyed a unique position where she carried the favour of an important – hell, the MOST important – person of the era. Virtually unknown now and managing to raise a family despite the terrible conflict she saw in her early life, the very least colonial Britain could do was to accept her and immortalise her in photography and make her one of the most wonderful black women whose history we should celebrate today.