Most teenagers today play around on Snapchat for entertainment. When Thomas Pettigrew was this age in the 1800s, he dissected corpses.

This week’s life in focus is one of those instances where the gravestone above ground doesn’t really do justice to the bloke several feet beneath it.

Thomas Pettigrew had a varied and interesting life: born in 1791 as the son of William Pettigrew who was naval surgeon aboard the HMS Victory. A medical man through and through: becoming the first surgeon of the West London Infirmary (which was the forerunner of Charing Cross Hospital in 1822) as well as vaccinating Queen Victoria and founding the London City Philosophical Society. But he was fascinated with antiquity and specifically: mummies.

The very same year that he was appointed to the Infirmary, he developed an interest in embalming. This was just as the fascination with Ancient Egypt was reaching its zenith: in 1821 the tomb of King Seti I was recreated at the Egyptian Hall in Piccadilly and its discoverer, Italian archaeologist an explorer Giovanni-Battista Belzoni, welcomed the crowd wrapped in bandages like a mummy. (Interestingly, this tomb was recently reconstructed in Switzerland.)

In a move that would horrify most historians and the general public, Pettigrew was called to assist Belzoni in unwrapping a mummy and this he did at private events for decades afterwards. The Victorians loved the theatrics of this gruesome and destructive form of exploring the past (and according to Jay Hulme, unwrapping the mummies may have been motivated by a belief of his that they were white. Sigh.)

Preservation? Be damned. Back when carefully analysing the past basically resembled opening these poor dead Egyptians like a walnut at Christmas, Pettigrew himself states in his 1834 book about mummies:

“…(it) required considerable force to separate the layers of bandage from the body…..and levers were absolutely necessary to raise the bandages and develop the body…”

This approach, thankfully, was not seen as professional and an anonynous author in the ‘Figaro in London’ wrote:

“Pettigrew positively glories in the unclean process and pulls about the encrusted carcass with a fervour of purpose which may be scientific, but is nonetheless nasty in the extreme…”

It’s likely many of the corpses he worked on in his teens were pilfered by the Resurrection men from the local churchyards: according to The Old Operating Theatre, when Pettigrew was the demomstrator of anatomy at John Taunton’s provate school, the latters name frequently cropped up in the ledgers of famed bodysnatcher Joseph Naples.

I suspect his passion for anatomy and mummies was seperated from seeing the bodies he destroyed as lives once lived. Whether this was an unconcious or concious approach on his part we’ll never know – I’m still trying to contemplate the ethical problems his actions had on our study of an ancient civilisation – but his infamy in mummy parties led to this next truly bizarre form of commemoration.

The Duke That Became a Mummy

Pettigrew was a very well connected man: corresponding with the likes of Charles Dickens, Michael Faraday and George Cruickshank, despite being known to infuriate people for his own amusement and be regarded as somewhat of a mercurial character.

For Alexander Hamilton Douglas, tenth Duke of Hamilton (1767–1852), who was also Lord High Steward at the coronations of William IV and Queen Victoria, Pettigrew’s demonstatrions were revolutionary. A dandy himself, he’d seen exactly how he wanted to end up. He wanted to take his place alongside the pharoahs and so mummification was the only logical way to deal with his body post mortem. Pettigrew was called. The work began.

Hamilton married the daughter of, at one time, London’s richest man – the eccentric William Beckford and, like his father-in-law, loved all manner of antiquity. Once mummification was complete his remains were placed in a sarcophagus that he’d bought for the British Museum: sourcing it in Paris in 1836 but then for reasons unknown, decided to keep it for himself. A rather interesting reflection on how England treated world cultures at the time – never mind the poor mummified person who’s coffin it was originally, I’ll have it instead: thanks.

Duly, the Duke was transported from his London residence to the huge, HUGE new mausoleum he’d built for his family in Hamilton, Scotland. Seeing the majesty of the Egyptians through Pettigrew’s demonstrations and interest, Hamilton wanted to have a standing similar to those Kings from Egypt and so placed himself beneath a mighty classical construction on his family’s estate.

Structural problems to the tomb after flooding from the River Clyde in the 1920’s meant he and his ancestors were evicted and reburied in a far more modest plot in Bent Cemetery nearby. The Duke was not parted from his artefact. 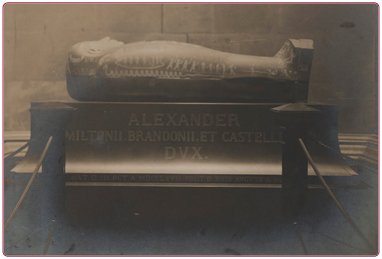 But what of Pettigrew? Brompton Cemetery records show that he died a his home in Onslow Crescent aged 74 in 1865. His home has long since been demolished but there are more stories to be told about him. Specifically, the tale of how he came into the possession of an Australian Indiginous Warrior’s head. I’ll revisit Mr. Pettigrew in the next few weeks.