Imagine being at the heart of communication in one of the most important buildings in the world! 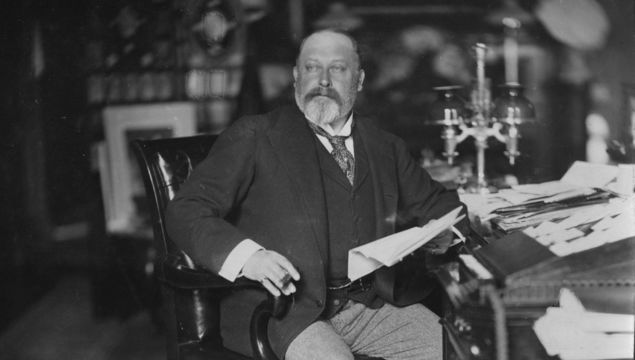 It’s 1903 and in his private office in Buckingham Palace, King Edward VII sits in his chair, pouring over a list of names. Making notes beside each one, the roll of names before him has been given Royal assent; those listed are soon to receive an Imperial Service Order – a Royal initiative that rewarded long service and thoroughly good work to government workers.

It’s an honour that’s largely forgotten nowadays, after a restructuring of the honours system happened in 1993. To get an ISO nowadays you’d need to bend the ear of officials in Papua New Guinea of all places. It recognised and rewarded the long service of civil servants upon retirement but certain stipulations had to be adhered to. Recipients must have:

On Saturday December 19th that same year, the King received a number of administrative old-timers and bestowed them with a shiny medal to thank them for their years of unfaltering service. For one man though, it was a bittersweet affair as this event also served as a reminder of his mandatory retirement. He was 65 years old and had, for the past 25 years, overseen the postage of the Houses of Parliament.

The time had come for him to put down the stamps.

Two years ago I was sauntering around Abney Park Cemetery in Stoke Newington and the third grave from the left  immediately grabbed me. I’d seen things like M.B.E and O.B.E on headstones before, but ISO? Added to the fact his job title, ‘Postmaster of the Houses of Parliament‘, this was clearly someone who took great pride in their work. Such was his dedication that I found out he never pulled a sickie in over two decades worth of service.

Parliament’s Postie. What can we find out about Edmund William Pike in this fairly obscure grave in Hackney?

Pike was born in July 1828 in Ilchester, Somerset, the son of a saddler. By the age of 17 he was working as journalist on the Wells Journal and by the 1860’s the bright lights of London brought him to work at the General Post Office Building, now the location of the Bank of America.

It would seem he commuted from his home in Mile End as censuses of the 1870’s and 1880’s has him living at addresses near my old stomping ground, Tower Hamlets Cemetery and had he not been given the prestigious role of Postmaster in Parliament, he probably would have ended up there. His first wife, Anne, is buried with her family as she’s listed in the cemetery records in 1878.

Pike started working at the Palace of Westminster that same year which also coincided with the erection of Cleopatra’s Needle on the Thames Embankment, as well as the dreadful Princess Alice disaster which remains one of the worst river accidents ever to happen on the Thames.

The Post Office in Parliament nowadays isn’t in the main building but over the road in Portcullis House, using technology and logistics that would baffle Pike were he to show up to work today. According to the census of 1881 he’d moved from his residence in Mile End  to a bigger home in Yerbury Road in affluent Holloway, reflecting the standing and salary of the job, and with this he and his second wife Mary embraced a new chapter in their lives.

Losing his first wife must have been a dreadful strain on him, but from what I can see he approached his new role with the vigour and professionalism of someone entirely dedicated to doing the best he could. Obituaries of the time show he was acquainted with the all the parliamentary greats such as John Bright and William Gladstone: towards the end of his career Arthur Balfour presented him with a silver salver and £127 as gratitude for his services.

I have tried to contact the Parliamentary Archives to see what information they had on him and his time in their employ, but no response has been forthcoming. What I can glean is that he significantly increased the operation from a tiny office and three clerks to a department that handled information to which we can only dream of processing first hand.

A handy fact-sheet from Parliament details the history of postage in the seat of power and Pike’s tenure, shows impressive expansion. Here’s some stats from 1891:

Think of the stuff he must have processed. Letters handwritten by Chamberlain and Disraeli!

My jaw dropped a little when I found something out whilst researching where he lived. As he approached retirement he moved to the very pretty Hilldrop Crescent, also in Holloway. The same road that infamous murderer Dr. Crippen would eventually call home! Crippen moved into the crescent in 1905: it is feasible that the postie and the murderer had given blissfully ignorant nods of acknowledgement to each other in the street. A tangible connection to history!

In an age where retirement often was the start of a decline in general health, seven years after he left Parliament for the last time, he died on the 1st August 1910 in Shanklin, on the Isle of Wight from complications of diabetic coma. I assume the grave was bought years beforehand for his eventual deposit, where he was later joined by his wife Mary and son Cuthbert.

The people he met: the place in which he worked. Luckily for me he left some clues so that 109 years after his death, it provided me a way to distract myself from the ongoing headache that’s Westminster at the moment.