Occasionally I find gems from the archives that were published years ago by my cemetery and graveyard-loving predecessors – and this particular one deserves to be seen my living eyes once more.

The following words originally appeared in ‘The Bizarre Notes and Queries in History, Folk-lore, Mathematics, Mysticism, Art, Science, Etc‘ that was published by American publishers S. C. & L. M. Gould in 1890. It’s available to read on Google and is full of articles of random interest, such as the total number of card combinations for 4 players during the card game Whist (53,644,737,765,488,792,839,237,440,000 apparently) and the ‘Antonomasias of Cities’  (Hull – the City of Baltic trade! Washington DC – the City of magnificent distances! Rouen – the Manchester of France!).

But it’s also interesting from a historical perspective, in that one article highlights the final resting places of English poets. It’s always fascinating to read such pieces from history: who was held in reverence back then often doesn’t translate to the present day. Today, most of these names will illicit a shrug and a puzzling ‘who the f*** is that?’ response. A fair number did to me, anyway!

I have kept the formatting as to how a reader in 1890 would have read it, but I have tidied up some odd phrases and words, as well as clarifying some of the oddly vague (and in some instances, not quite right) locations given by the writer. I have also added my own bizarre notes of interest here and there.

Take it away, Fred Myron Colby.

It must ever be a subject of interest to know where they rest at last — the great poets of England. As in life they were a blessing to countless multitudes, so in death their works still survive, keeping fragrant their memory and ministering to the intellectual enjoyment of mankind the world over.

The “Poet’s corner” in Westminster Abbey, contains the dust of many of these sweet singers. Geoffrey Chaucer leads the sleeping host. He was the father of English poetry, and the music of his Canterbury Tales is as sweet as that of the nightingales with which he sung. He was first buried, October, 1400, in the cloisters outside the Abbey, but in 1555 his body was removed to the tomb it now occupies in the south transept. He remained alone in his glory for nearly a half century.

Edmund Spenser, author of the ” Faerie Queen,” was the next poet buried in the Abbey. He died in 1599. Beaumont, Fletcher, Jonson, and probably Shakespeare, were among his mourners in the funeral procession, and the expenses of the burial were paid by the irl of Essex. Beaumont was next buried in the same place, and he was followed by Ben Jonson. Before his death, the later asked King Charles I. for ” eighteen inches of square ground in Westminster Abbey.” He is thought to have been buried in a standing posture, and this request is adduced to prove his purpose. The inscription —

is said to have been cut for eighteen pence, at the charge of a friend of the poet named Jack Young. [weirdly – this is entirely true. in 1849 his body was disturbed when a new neighbour’s grave was being dug: Jonson’s red hair still clinging to his scalp].

Dryden’s tomb is there too, a costly monument, reared by his friend Sheffield, Duke of Buckingham. Many inscriptions were prepared, but a very simple one was adopted. Pope suggested this :

“This Sheffield raised; the sacred dust below Was Drydens’s once — the rest who does not know?”

In the same corner sleep [Michael] Drayton, [Abraham] Cowley, [William] Congreve, [John] Gay, [Matthew] Prior and others famous once but half forgotten now. Here, too, one may read the epitaphs over the graves of Robert Herrick, James Brinsley Sheridan and of Thomas Campbell, the author of the ” Pleasures of Hope.”

But England’s immortal bards do not all rest in that sacred and venerated spot. It was intended to lay the remains of Shakespeare near his friends Spenser and Jonson ; but the plan was frustrated, possibly by the anathema contained in his epitaph, written by himself, against any one who should ” move his bones, or dig his dust.” His dust, as is well known, remains in his tomb in the chancel of the quaint little church of his native town of Stratford upon Avon.

John Fletcher who is always associated with Francis Beaumont- sleeps away from his friend in St. Savior’s Church, London [nowadays known as Southwark Cathedral]. The noble author of the ” Arcadia,” Sir Philip Sidney, whom Queen Elizabeth called ” the jewel” of her kingdom, and whose funeral expenses were defrayed by his sovereign because of her great regard for him, lies buried in the great cathedral of St. Paul’s. 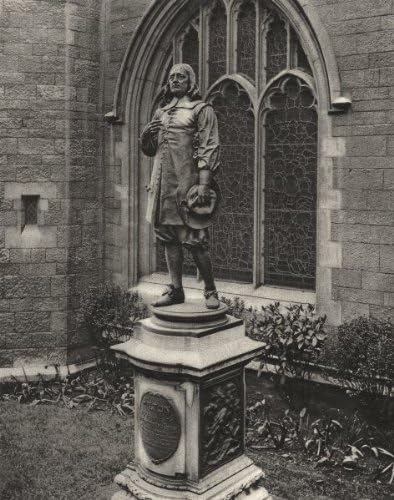 Milton has a bust in Westminster Abbey, but the poet’s modest tomb is in St. Giles’ burial ground, at Cripplegate, to which place multitudes of pilgrims journey every season to stand at the sepulcher of the author of ” Paradise Lost.”[bombed during the war, now he’s remembered by a bust in the church].

Samuel Butler, of “Hudibras” fame, died in Rose Street, London, and was buried in St. Paul’s churchyard, Covent garden. The church yard at Stoke Pogis is remembered not only as being the scene of the ” Elegy in a country churchyard,” but also as the place where its famous author lies buried. Thomas Gray’s [obviously so famous in 1890 his name wasn’t worth mentioning] tomb has also become a Mecca around which the admirers of his genius gather, from time to time, to pay loving tribute to his memory. He was interred by the side of his mother to whom he was tenderly devoted, and on whose monument he caused to be inscribed this singular but affectionate epitaph : ” Dorothy Gray, widow, the careful and tender mother of many children, one of whom alone had the misfortune to survive her.” 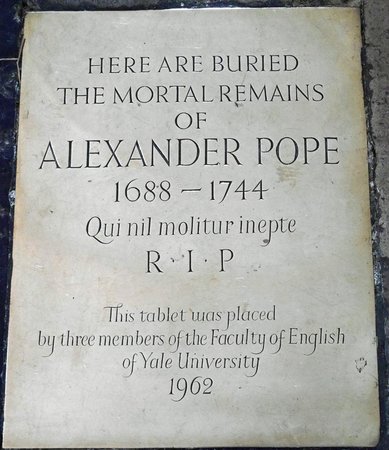 Pope chose to be interred in the pleasant little church at Twickenham, where he had always worshipped. He resembled nobody else in body, mind or estate. He was always unique in all that he said or wrote or did. Of the proposal to lay his body in Westminster Abbey, he wrote :

“Heroes and kings, your distance keep, In peace, let one poor poet sleep, Who never Mattered folks like you : Let Horace blush and Virgil too.”

He took more pleasure in this repulse of the proffered honour than others enjoyed in the anticipation of it. [His skull was also pinched at some point in antiquity, and this annoyed his essence to the point he supposedly haunts the church, probably wondering where his bonce has got to].

Dean [Jonathan] Swift died in Dublin, where he had been born, and his remains were laid away beneath the chancel of his beloved St. Patrick’s Cathedral. Edward Young, the author of  “Night Thoughts,” lies interred at Welwyn, in Hertfordshire, and the author of ” The Sea sons,”[and more notably to us today, Rule Britannia] James Thomson, at [St. Mary’s Church in] Richmond, in Surrey.

William Collins, who wrote the famous ” Ode to Passion,” is buried in the churchyard at Chichester, and Charles Churchill in that of St. Martin’s at Dover. Henry Kirke White whose young life promised such a glorious future, but who died of consumption at the age of twenty-one, is buried at All Saints’ church, Cambridge. A tablet to his memory, with a medallion by Chantry, has been placed over his tomb by Francis Boott, an American [and successful fever doctor who practised in London for seven years, before retiring and dedicating himself to literary and scientific studies. They never met, but White’s life story resonated with Boott]. 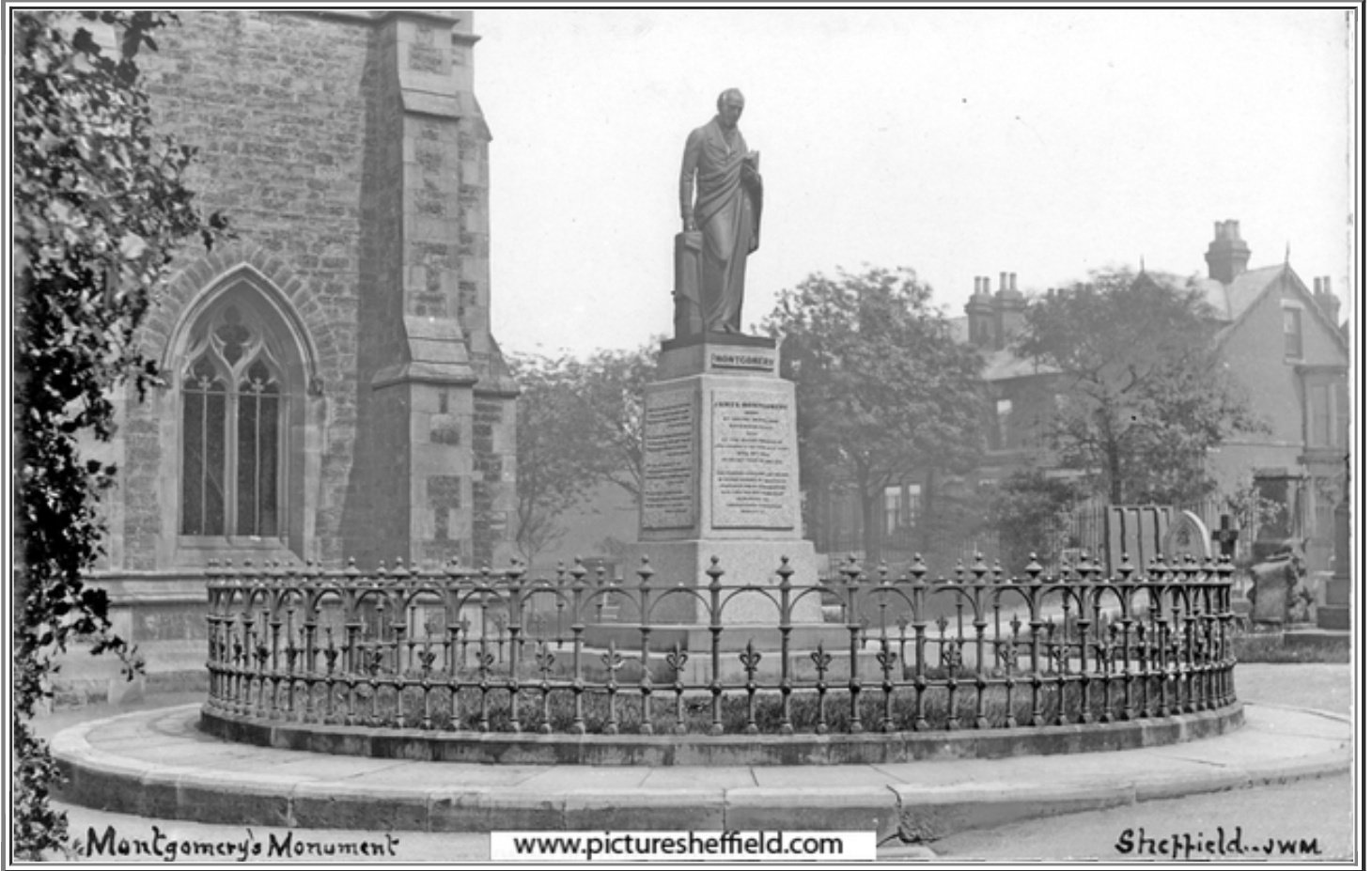 James Montgomery lies at rest in the graveyard at Sheffield [although his monument was later moved to the Cathedral in the 1970s]. Samuel Taylor Coleridge was buried in the church at Highgate, and his life long friend, Southey, in the church at Crossthwaite, Kenwick. Charles Lamb is interred in the cemetery at Edmonton [All Saints Churchyard]. [Edmund] Waller in the graveyard at Beaconsfield, and Wordsworth in the neglected churchyard at Grasmere, in Westmoreland. 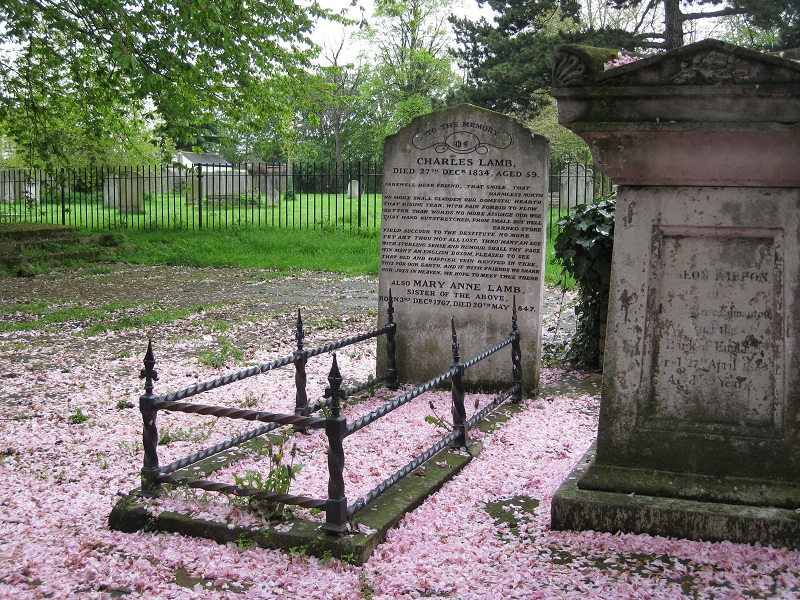 The dust of Lord Byron, all but his heart which was buried at Missohoglie, is in the family vault at Hucknall church near his favourite Newstead Abbey. The mortal part of Sir Walter Scott rests in Dry- burgh Abbey, and that of Burns in St. Michael’s churchyard, at Dumfries. The church at Dereham holds the remains of the melancholy [William] Cowper, and the gifted suicide, Thomas Chatterton, is buried in the cemetery of Shoe-law Work house, in the Parish of St. Andrew’s Holborn [although he wasn’t when Colby wrote this. It was redeveloped in the 1880s and all burials were put into St Andrew’s Gardens on the Grays Inn Road.]

The monument to Thomas hood has now been robbed of its bust, bronzes & medallions

Oliver Goldsmith’s epitaph can be seen above his resting place in the churchyard of Temple church, in London. Thomas Moore is buried at Browham, Ireland, in the churchyard where he had laid his children many years before. The brilliant Tom Hood who died broken hearted and poor, is interred at lovely Kensal Green. George Crabbe is taking his last sleep at [St. James’s Church] Trowbridge.

Keats and Shelley lie together in the beautiful Protestant cemetery in Rome. Gentle Mrs. Browning is buried in the English cemetery at Florence, and so is Walter Savage Landor, who died an exile from his country. At Florence, too, lies Arthur Hugh Clough, under the skies that inspired his tenderest poetry. 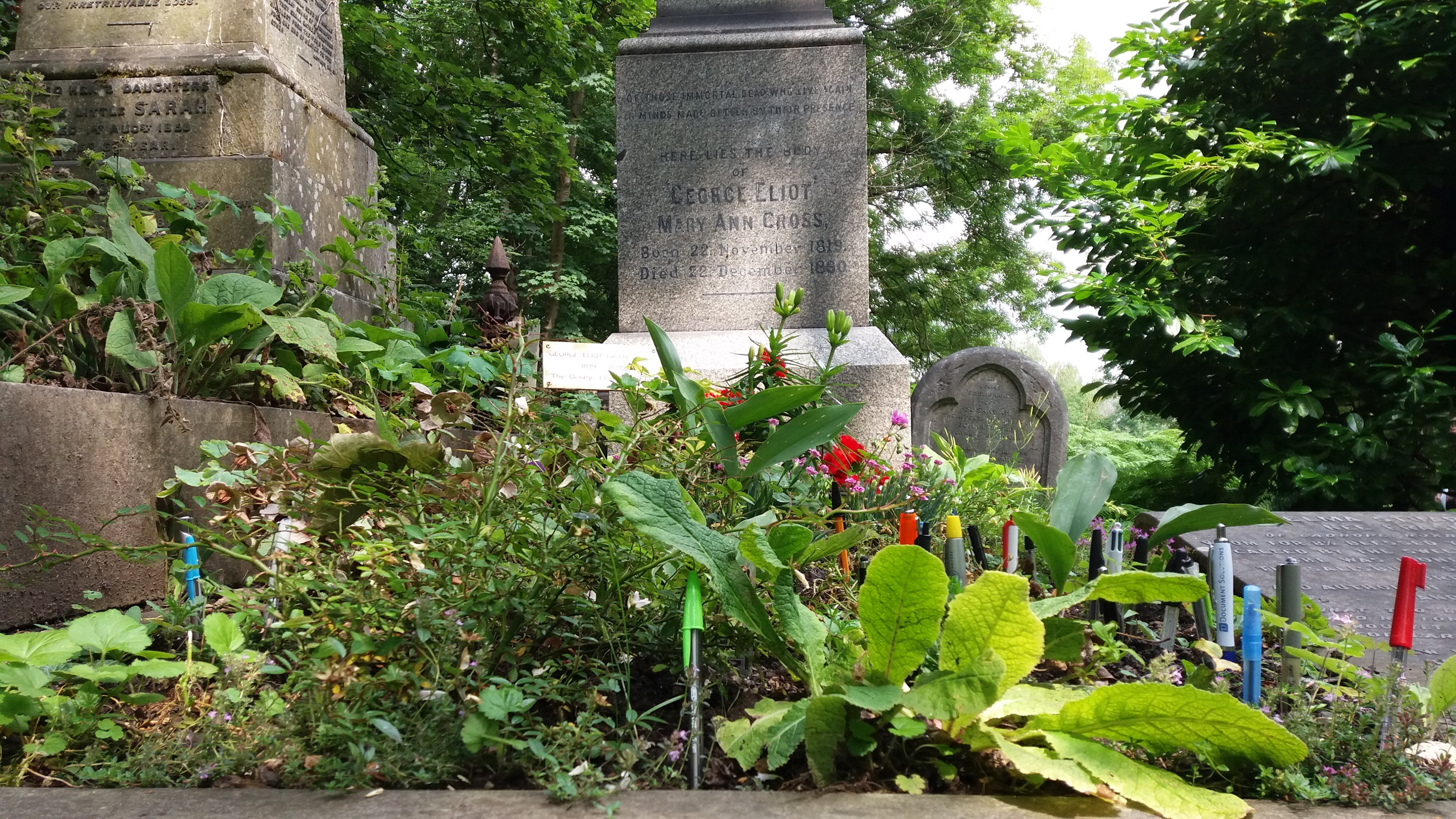 Rosette is buried at Birchington-on-sea, England. Mortimer Collins is interred in Petersham churchyard. George Eliot rests for ever in the little English church at Highgate, [Highgate Cemetery] and Dinah Mulock Craik lies in the burial ground of Keston Parish church in Kent, not far from her old home at Shortlands [Keston isn’t close to the Old Corner House in Shortlands, her specially built home by Richard Norman Shaw – Craik implicitly wished to be buried there, although the exact reason why I’m still trying to find out].

And so they rest, the quarter part of them, on English soil, and quiet is their slumber.

Whilst I’m sharing Colby’s words, I may as well write an entry about him, in his style:

Frederick Myron Colby was an educator, writer and politician – who unsuccessfully stood for election to Congress in 1908 as a Democrat. Primarily his writings were aimed at children and he is buried in Pine Grove cemetery, New Hampshire, USA.

You may also like to take a look at:

The Tombs of Old London