Visitors to the Dickens Museum may be surprised to see a gravestone in the back garden.

Of course it is perfectly legal to be buried in your own garden if you’re lucky enough to own one. But this headstone is a cenotaph: no bones lay beneath it. The actual person it commemorates has a fascinating (and rather sad) link to one of our greatest writers whose best known story informs the Christmases we have today.

The Dickens Museum on Doughty Street is split between two houses; one being the abode that Dickens himself lived in between 1837 and 1839 as he reared his young family. The eldest of the three children he had with his wife Catherine were born here and his sister-in-law also lived with the family, of whom he had an unhealthy fascination with in life as well as death. Dickens’ closest (and in later years, estranged) brother Frederick also lived here for a time, too.

It’s the only London residence of Dickens that is still standing, which also highlights the importance of the building in the personal history of the author of David Copperfield and Our Mutual Friend.

The courtyard garden, which just comes off the cafe at the rear, now has a headstone propped up against the exterior wall. Sacred to the memory Robert Seymour.

Robert Seymour was a Somerset-born illustrator whose works had him held as highly as William Hogarth or his contemporary George Cruickshank. Dubbed the ‘Shakespeare of Carciature’, he was the first artist to ever illustrate a work by Dickens, when an extract of ‘The Bloomsbury Christening’ was featured in ‘Seymour’s Comic Album’ in 1834.

Prolific is an appropriate word to use for his output. Out of all his illustrations, his caricature of Father Christmas is one of the better known examples of Old St Nick in the 19th century, complete with is Yuletide Goat. 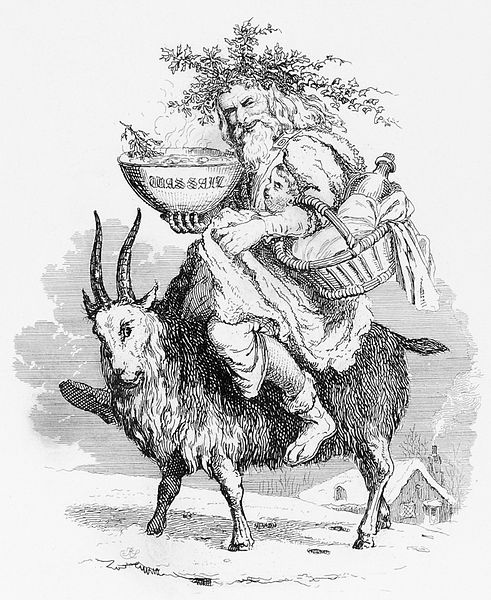 It is known however that from 1830 onwards Seymour experienced issues with his mental health (perhaps as a consequence of the never-ending demands of providing illustrations) which were further exacerbated by his employer, the publishers Knight & Lacey going bankrupt and a textbook case of workplace bullying from the editor of satirical magazine Figaro, Gilbert à Beckett.

As with most stories that you find in a cemetery, Seymour died, but in a particularly horrible and heartbreaking manner.

The Pickwick Papers. A Dickens classic, and ultimately, the reason why the headstone was carved. The story concerns Samuel Pickwick, founder of the titular Pickwick’s gentleman’s club. Members go off on their travels by coach to report on their experiences to other members of the club. Hilarity ensues – as did its popularity.

Seymour suggested the concept and reckoned a serialised story would make for good reading, with him on artistic duties. Dickens, then a young writer, was brought in and weaved his literary magic and added his own ideas to the narrative.

Seymour felt sidelined and the series was affiliated more with the genius of Dickens. This brought on an incredible depression and 24 hours after producing the final illustration, ‘Death of a Clown’, he committed suicide with a gun that this Guardian article describes as ‘disintegrating his heart’.

The series would go on to have sequels illustrated by others, including Robert W. Buss (the same man who started, although never finished, the illustration of Dickens in his study surrounded by his characters after the authors death in 1870 because of, ironically, his own passing) with Seymour receiving no recognition or royalties for his work. Dickens, in response to his widows protestations rather bluntly stated in the preface to the 1867 edition that Seymour had no influence into the work, a full 30 years after the original publication date. Obviously, this bone of contention stuck over the years.

So why is the headstone here?

Seymour was buried in the churchyard of St Mary Magdalene, Islington, and was given this headstone. This is notable as the shame of suicide was often seen as a mark on the surviving family, with many people who ended their lives in a similar manner often being buried in common, unmarked graves. Seymour dodged this fate: I suspect on the age-old excuse that ‘temporary insanity’ deprived him of a sound mind and therefore made a proper burial possible.

The churchyard was cleared to be laid out as a public park as overcrowded churchyards were closed in favour of the ‘Magnificent Seven‘ and their successors from the 1850s. The Churchyard was remodelled in 1885 and many of the headstones were lost.

Enter Stephen Jarvis, who was working on a novel whose interest was piqued by the life of Seymour and his clash with Dickens. Scouring the crypt of the church, which has some lovely coffins in it, Seymour’s headstone was found  amongst the thousands and it was unveiled in the grounds of the Dickens Museum in 2010 to address the maligning of Seymour’s contribution to the series.

So did Dickens kill him..?

Of course not. “I don’t think Dickens can be blamed for Seymour’s suicide.” said David Parker, a former curator of the Dickens Museum in an article from the time of the unveiling. “That’s not to say that he handled his transactions with Seymour perfectly, but blame is another thing … If there is any truth in the hypothesis that the distinguished illustrator couldn’t bear to be bossed around by the scribbling whippersnapper, then it has to be said that Seymour had failed to grow up and come to terms with realities.”

What we do know is that Seymour’s death, at only 38 years of age, left a terrible pain on his surviving family in an age before financial aid or support were available for those in need.

So while this isn’t the happiest of histories to connect to Dickens at this festive time, wider discussions on mental health in the 19th century, attribution and a key role in the history of Dickens first big literary success is imbued into a marker a long way from the bones of the man who still rests in a churchyard in Islington. Its location in the Dickens Museum details the kind of human history that Dickens would include in the literature he would produce until his own death in 1870.