I would say ‘hold onto your hats everyone because it’s about to get seriously geeky’ but let’s face it, you knew that when you came here. It’s a blog about how we like to wander cemeteries and learn about Victorian architecture for Gawd’s sake.

Having said that – really do hold onto your hats. Because it is about to get geeky with a capital G (TA).

I went on a cemetery tour this week that was a bit different. At Cemetery Club we’re always looking for interesting and unique experiences and tours, and I have to say, this tops them all so far in terms of those things, as well as total weirdness. It was a beautiful cemetery that I chose to visit. It was set across a hill overlooking a glittering city. There was a vista point right at the top of the hill, complete with viewing platform and binoculars. There was a lagoon-like lake in the very middle of the cemetery, with a quaint little bridge leading to an island that had a giant, majestic looking tomb on it. The sun was shining, people were strolling along, reading the gravestones or relaxing on the benches dotted around the cemetery. It was just as tranquil and calming and mind-clearing as every other cemetery I’ve been to as part of this amazing ongoing Victorian adventure that Sheldon is being kind enough to let me share.

Except it was Hill Valley Cemetery in the North American city of Los Santos.

In Grand Theft Auto V on the XBox 360. And I wasn’t really there.

I told you it was about to get geeky.

Aside from letting you know that Grand Theft Auto V became the fastest selling entertainment product in history after only a few days on the market, I won’t introduce the game to you. If you’re alive in the world in 2013, chances are you’ve at least heard of it. If you’re a gamer then you’ve probably already completed it by now. If you’re anything like the type of gamer I am, you remember fondly the days of 1997 when the original Grand Theft Auto game hit the PS1 and we all rejoiced over the fun bird’s eye view, the amount of cartoon blood a cartoon assault rifle can produce when viewed in pixels and from above and the use of the word ‘kapeesh’.

Safe in the knowledge that you know vaguely what I speak of when I refer to GTAV, I’ll leave you to do any further research you need to regarding the most expensive video game ever made* here, here and of course, here.

The world of Grand Theft Auto is one you journey to in order to raise some hell. It’s a bit of escapism for the modern world, and while you might argue that it’s gratuitously violent and generally unpleasant and amoral, you might also say – yeah. That’s kinda the point. It’s a massive, massive open world game in which you can go and be whoever you want and do whatever you want with very little consequence (if you’re good at hiding in the bushes until the cops leave that is). There’s much debauchery. Much gang crime. Much getting-of-terrible-tattoos-that-come-right-off-if-you-go-back-to-an-earlier-save-point. And much murder just for fun.

In a city with this much gang crime and this much murder, it stands to reason that there must be a cemetery or two knocking about. As it happens, I found the one featured here totally by accident, whilst driving about on the lookout for people to run over because I felt like it. I crashed into the outer fence of the cemetery, completely writing off the Enus Super Diamond I had jacked about 9 minutes earlier, and thought – ooh.

Now, this is the part where Sheldon would tell you about the site’s history, geography, archaeology, geology, genealogy etc. I can’t do that because this is a video game. And also because, being based heavily on the USA, the cemetery is unlikely to contain much Victorian inspired architecture at all, and much more likely to be airy and modern, like so many pristine white baptist churches I spied dotted around the countryside on a recent trip to Tennessee. Not that I haven’t tried you understand. When I sent Sheldon a screenshot of the cemetery by text, he promptly asked me who the architect was and my improvised reply was the fictional ‘Charles Merriweather Jr’. His response was to ask if this was someone who was related to William Tite. I think anything historical at all may be lost here.

However, I can tell you about how impressed I was with the sheer amount of detail the game designers had gone into, as evidenced by the writing that was visible on each individual gravestone, including the joke epitaphs I found written on a few, an Easter Egg I may not have come across if I hadn’t been so used to getting up close and personal with gravestone engravings in real life.

There were other little details that I found fascinating. The flowers and wreaths that had mysteriously been laid by some graves, presumably by virtual mourners who had visited the cemetery before me. 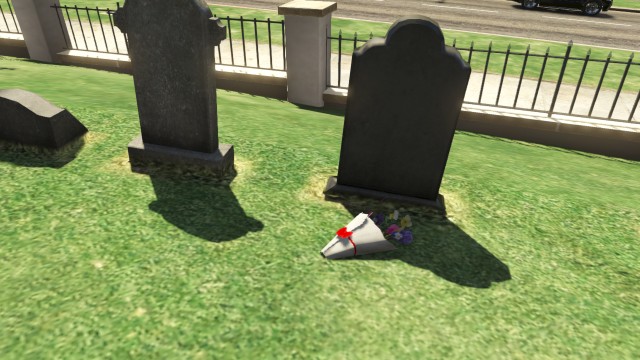 There was even an open grave midway along one of the rows, with an abandoned wheel barrow by it’s side.

After some wandering, and quiet reflection by my video game character on what he was witnessing and all the things he was learning (at least, I like to think that’s what the look on his face represented), I came to the centre of the cemetery, and the peaceful looking lake that resided there.

Across the bridge and onto the island I went, and another charming little detail resided there, along with a mystery worthy of Montague Fowler himself!

The ethereal looking blob in the foreground turned out to be a scrap of paper relating to the Mystery of Leonora Johnson’s Murder. But what does it mean?! I guess some history and genealogy does exist within the world of GTAV after all.

All of the most magnificent cemeteries I have ever been to had a hill somewhere within their grounds, that boasted spectacular views over the city they belonged to. Even as I type this sentence, St Paul’s Cathedral dome sparkling radiantly in the distance as glimpsed through the trees at the top of Nunhead Cemetery springs to mind. And Hill Valley was no different. I climbed up a steep hill with hundred of steps and found the whole made-up city of Los Santos spread out before me in all it’s splendor.

It was time to go all too soon. I had seen all there was to see, fallen into an open grave which took an infuriating few seconds to work out how to escape, and basked in the minuscule detail of what I’m sure is just 0.01% of an enormous open world game that would take months of lying in one place on my sofa to explore properly and extensively. I was sad that Sheldon had not accompanied me on my journey, relaxed by the restful nature and atmosphere of the place (as I always am) and a little weirded out by the new level of nerd-ness I had spent the last 45 minutes reaching.

Although not weirded-out enough to be deterred from asking my gaming expert and writer brother if he knew of any other cemeteries within the GTAV game world. He did some research. The answer came back thus:

In summary, my virtual visit to Hill Valley Church and Cemetery in the fake city of Los Santos, loosely based on the (mostly fake) real city of Los Angeles, California was just like any one of my previous Cemetery Club visits in the all too real-yet-misty realms of Victorian London. Just like it down to a tee. Except for one small detail which is also a confession of sorts: on arriving at the cemetery using my me-but-not-me video game character (a tall black man with a giant afro and a gangster accent to die for who, I’m afraid, bears no resemblance to me whatsoever), I ran across a man crouching in a tidy looking flower bed near the church entrance. He was wearing pixelated dungarees and I took him to be the resident gardener. There was nobody else around and I was feeling mischievous, so I pulled out my shotgun and put a bullet in his head. He fell face forwards into the dirt without making a sound. I stole his cash, which amounted to $17. There were no witnesses. I then continued onward to begin my tour.

I never did that at Highgate West.

I wanted to end by somehow linking my virtual cemetery tour to the idea that the lines between our virtual and real selves are becoming more and more blurred in this modern age, and questions about what will remain once we’ve gone if we’ve lived so much of our lives and housed so many of our memories in the realms of online photo albums, blogs and social networking. But that’s a.) too tenuous and b.) too big a subject to cover here and now. So for now, be inspired to take a virtual tour of something today. Or a real one. And don’t be afraid to geek out.

All photos are in game screenshots, courtesy of me and also Rockstar Games.

*the game with the highest production budget of all time. See more here.

3 thoughts on “Grand Theft Gravestone:- A Cemetery Club Visit with a Virtual Twist”