Surfing eBay one lunchtime, I found a single page from the London Illustrated News. On a page with barely readable writing, alongside some beautiful engravings of steles and sculptures of the Copán archaeological site in South America was a slightly planer illustration celebrating the memorial to James Ward, R.A.

Who was James Ward, R.A?

Ward was one of the most celebrated artists of his day, specialising in painting and engraving images of animals. He was born in Thames Street, London, on the 23rd October 1769. Starting off as an engraver under his older brother William,  he joined the family firm and contentedly did this until he was thirty five years old.

He’d always had an interest in painting, specifically animals, so decided one day to quit his day job (and the several thousand pound commissions that went with it), much to the horror of his friends – one proclaiming:

‘We’re losing the the greatest engraver of the day, and should have a very bad painter in exchange!’

Following his heart, he was banking between £50 – £70 a day painting horses and bulls. He also worked on landscapes – his work on Gordale Scar, in Yorkshire for example, was presented to the British Museum.

He also painted a grand allegorical picture entitled ‘The Triumph of the Duke of Wellington‘ which was presented to the Chelsea Hospital, where the old Red Coats acted as tour guides to the various occurrences that were happening on canvas, giving them much deserved beer money from the interested public. This portrait has now gone walkies; supposedly a long-dead Governor removed it, rolled it up and stored it in a lumber room.

He was elected to the Royal Academy in 1807 and became a full member four years later.  His talent was cruelly robbed of him when he was ‘struck by paralysis’ aged eighty six; aged 91 he dies in Cheshunt in poverty. His reputation however afforded him a handsome memorial in Paradise by way of Kensal Green.

It’s a shame when someone regarded to as ‘the father of the Royal Academy only has a stub biography on its website and doubly disheartening when you see that proud illustration of his grave is now a very sorry sight indeed.

I’m a massive fan of 2-for-one deals and when I discovered that Spy, the legendary Victorian cartoonist, was James Ward’s great-grandson, I went giddy. If you research any image of a Victorian politician or celebrity you’ll invariably come across a caricature of his which graced the pages of Vanity Fair for decades. As an occasional cartoonist myself, his stuff has been an amazing reference point.

Such was the influence of his style that his artwork became known as Spy cartoons, whether they were by him or not.

After an unremarkable time of study at Eton, he was apprenticed to family friend Sidney Smirke to train to become an architect, a profession he never really enjoyed. With the reassurance of narrative painter W.P. Frith to his father, he was advised to become an artist instead and was entered into James’ own Royal Academy schools in 1871. Two years into his studies he sent off some samples of his work to Vanity Fair, which published his work continuously until 1911. 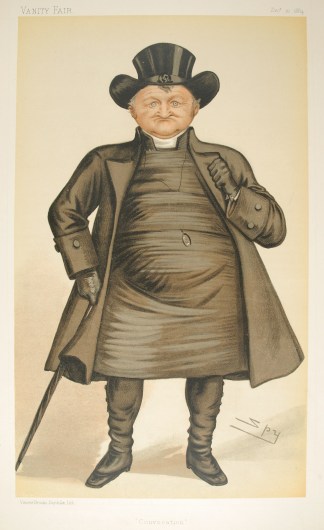 One thing that you’ll notice with Spy’s drawings is that they become less exaggerated as time goes on; Ward became part of the very set he was lampooning and so perhaps now considering that he had relationships with many of his targets, his style understandably softened. This was observed during his own lifetime, with accusations that his art was becoming increasingly sycophantic rather than observational.

Spy suffered a nervous breakdown and died shortly afterwards in 1922, buried in the same cemetery as his great-grandfather under a marble cross, which like his ancestor’s memorial, is also broken. Isn’t it remarkable to think that two members of an artistic dynasty, both with very different styles, lie amongst thousands of other souls whose stories are waiting to be rediscovered.

2 thoughts on “The Wards”