A Jaunt to the London Necropolis

‘So. Sheldon. The Monuments and Mausolea Trust are having their AGM at Brookwood Cemetery. You want in?’

How could I, intrepid cemetery enthusiast and curator of Cemetery Club, say no?

Brookwood is one of those cemeteries I’ve long been meaning to visit. Mike Fox of the Monuments and Mausoleums Trust in Waterloo kindly invited me to take the train down to deepest, darkest Surrey and emulated the one way trip thousands of the cemetery’s residents once took themselves. So what’s there? 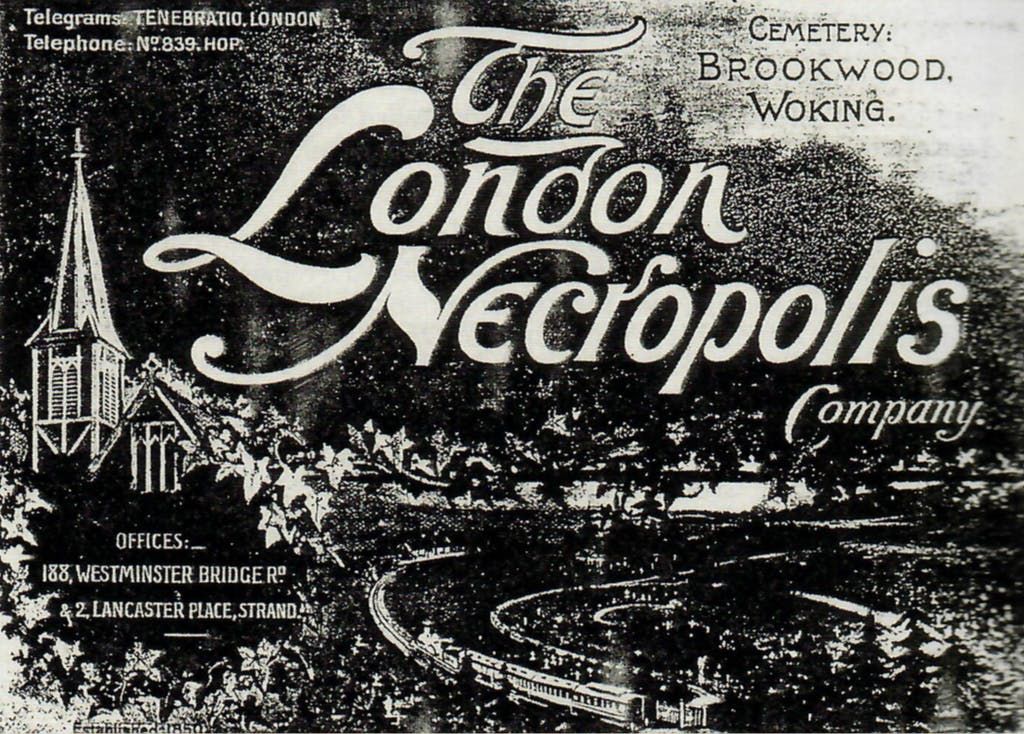 The seven newly-opened cemeteries around London in the 1830’s and 40’s weren’t enough to deal with the unrelenting dead that London produced but it wasn’t until the 1850’s, that the next phase was begun. A handy rail link made Brookwood an attractive alternative to the city’s libraries of the dead, founded by the London Necroplis Company.

In a remarkably philanthropic gesture (and pre-NHS/social care provision) many industries formed co-operatives to look after their own in the event of illness or death. Actors, and travelling entertainers lived vicariously and many died too poor to bury themselves in a respectable plot. This simply wasn’t good enough to Mr. John Anson.

Anson, who started his professional career at the Theatre Royal Bath in 1843, toured extensively. Basing his company in Inverness and Belfast before coming to London, it was at this time he acted as treasurer to the Adelphi Theatre between the 1850’s and 1870’s. Deeply concerned with the welfare of actors and those who worked at the front and back of the theatre industry, he founded a retirement home in Woking (the ‘Royal Dramatic College) which had the backing of Dickens and Thackeray (and even have the future King Edward VII laying the foundation stone in 1860).

His worry continued post-mortem; he purchased a plot in Brookwood opposite the Catholic chapel on behalf of his Dramatic, Equestrian and Musical Sick Fund for cash-strapped actors to have a guaranteed final resting place. Five hundred luvvies now rest there, not all fortunate to have a headstone, mind – and some of those who are there include the Fox-Coopers, who are related to the very same Coopers who gave us the car.

Other institutions and societies have plots here too – from City churches, Swedish burial grounds and the Zorastrians, which I’ll write about in the future.

A fifteen minute walk took us into the heart of the cemetery to a pleasant little tomb that resembles a medieval chalet rather than a place of rest. Reputedly this was the first mausoleum to be built in the cemetery and was probably a chapel in its early years; it was bought by the Colquhoun family and turned into their own private vault not long afterwards.

Sir Patrick, who rests in the vault in the basement, was a diplomat who spoke most of the languages to be heard in Europe. He tried to have his pet dog buried here when his time came, however cemetery management weren’t having any of it and refused.

He frequently complained to cemetery management about the drainage problem the vault kept having; indeed when a fellow group member took a picture of the cavern below the floor it was calf-deep in bluey-green water. If you were to descend to the depths it would have resembled the ocean zone in the Crystal Maze. Sir Patrick also happened to be a keen rower, so perhaps he appreciates this reminder of his former past-time now. The architect, J Johnson, would go on to help build Alexandra Palace.

3. Queen of the Curve

Until recently my workplace was near one the most architecturally bold buildings in London – the London Aquatic Centre. This was one of the crowning jewels of the Olympic Park in 2012 and was designed by the ‘paper architect’, Zaha Hadid.

I’m not aware of an architect leaving a mark on a city to the same level of prestige as Sir Christopher Wren or George Gilbert Scott; in my opinion she easily ranks among them as someone who successfully challenges existing design principles and evaluates how a building contributes to a living, working space.

Born in Iraq in 1950 and ‘one of the most brilliant pupils I’ve ever taught’ according to her former tutor, Greek architect Elia Zenghelis, she became a naturalised British citizen in 1980 and started her own architecture practice shortly afterwards. Lecturing at Cambridge, Harvard and Columbia Universities, her commissions have included the Guangzhou opera house in China, Sheikh Zayed Bridge, Abu Dhabi and Galaxy Soho, Beijing.

This beautiful, although sadly, moss-riddled grave is where Guilio Salviati lies. His father founded the glassware company after becoming bored of being a lawyer and upon his death in 1890, it passed to his children –  Amelia, Silvio and Guilio,  the latter of whom was born in 1843.

His craft and skill with mosaics saw him contribute to some of the most iconic buildings of the age – the Prince Albert Memorial in Kensington Gore and the the rich, sumptuous interior of St Paul’s Cathedral being two stand-out examples. Handily, he also did some work on the Drake mausoleum which stands nearby, although sadly only a tiny slither of his electric blue tiling survives above the archway (see below).

Suffering a stroke from which he never really recovered, he committed suicide in his workshop in 1898. Because this was seen as a reaction to his illness, rather than a symptom of insanity, he was allowed to be buried in the Anglican part of the cemetery sans the judgement that suicides of the time usually had.

Or, the tomb that was meant for someone else – namely, the fifth Earl Cadogan, whose obituary in 1915 hails him as the ‘creator of modern Chelsea’. Upon inheriting the land he, and inventor of daylight savings William Willett (who also happened to be a builder) created broad streets and luxurious apartments where once there were dingy alleyways and ramshackle housing. Indirectly, they also gave us one of the greatest TV shows of the modern era.

He was also one of the wealthiest landlords in London at the time of his death, aged 63. This tomb was originally commisioned in 1878 but in 1910, he sold it back to the cemetery company for use as a columbarium instead. He opted to get buried in the family vault in Culford, Suffolk.

Many niches remain available for use –  here also is Sir Charles Pontifex, colonial administrator and judge of the court of Bengal between 1872 – 1882. You can see his cricket scores here.

This is just a taster of what’s here – I haven’t even gotten started with this place yet!

Thanks to Mikey for inviting me along!

3 responses to “A Jaunt to the London Necropolis”