Opening in 1791, it was built on the former gardens of a Carthusian monastery and is a literal suburb of the dead; many of Bordeaux’s great and good have been laid to rest here. I was supposed to be on holiday but I just couldn’t resist paying a visit.

So who do we have here?

The dead revelled in having impressive monuments as much as their British counterparts although generally speaking, the French tombs easily trounce the ones this side of the channel. They don’t hold back in either size or scale – take a look at this one.

This masterpiece is the tomb of Jean Catherineau, sculpted from a single block of stone by Jean Alaux in 1875. The figure of death sits with a scythe over his shoulder whilst a boat lies wrecked at its feet. Well known in nautical construction and a distinguished navigator, Catherineau also sanctioned the following epitaph:

‘Through science and intrepidity, the sailor can long brave the storms of the ocean but he is a pitfall against which he must inevitably break: death.’

Certainly not the most impressive sculpture in the cemetery but the figure on top is worthy of a mention. Look at that signature on the bottom right: L FOURNIER. Alfredo previously wrote a fascinating article about Percy Bysshe Shelley and included an iconic painting that depicts his cremation at Viareggio, overlooked by Lord Byron, Edward Trelawny and Leigh Hunt, albeit deploying considerable artistic license. Apparently this was sculpted by the same guy, although I can find no mention of the artist indulging in sculpture.

Although the cemetery was open from the 1790’s, individual plots weren’t really a thing until the 1810’s. Eugene Delacroix, in the 1840’s, had wanted to erect a monument to his father who had died some years before but was unable ton find where he was buried as the graves had been reused.

Which makes dear Nancy so important because she is the oldest undisturbed grave in the cemetery, being buried here in 1808 at the tender age of 21. The wife of a London merchant who settled locally, a shale plaque to the rear demonstrates the feeling of loss poor John felt at the premature death of his missus.

“Workers, without women, you are nothing!“

In a cemetery where male history tends to dominate, I was overjoyed to see that a real pioneer for women’s rights was here. Flora Tristan’s life wasn’t easy, from being considered illegitimate due to the uncertainty of her parent’s marriage to the short, abusive relationship she had with her employer and husband, engraver Andre-Francois Chazal (which ended after he shot and wounded her). She chronicled her experiences in Pérégrinations d’une paria (‘Peregrinations of a Pariah’) which is as much an essay on things such as women’s rights and slavery as it is autobiography and political call to arms. 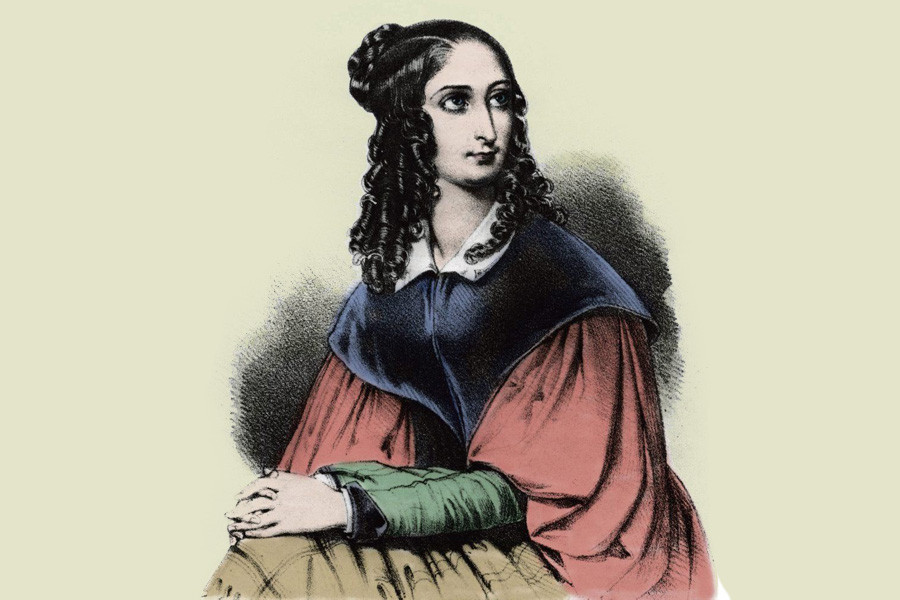 Seeking divorce but unfortunatelly being female in the 19th century, she escaped to Peru to be with her uncle and collect her paternal inheritance. Returning after a year with virtually nothing other than blistering anger at the oppression women faced on a day-to-day basis, short jaunts to Britain and then France saw her become a political activist, identifying that workers and womens right were entwined. Merging feminism and socialism to ensure that the workers voice would be heard was no mean feat and she extensively toured factories and workplaces pushing workers to fight for rights.

Dying of typhoid in 1844, her legacy would influence the likes of Karl Marx and challenged the role of a woman in the 19th century. Her grandson was Paul Gauguin, who idolised her.

Goya is probably the best known person associated with Chartreuse cemetery, although he’s no longer here. He’s now back in his native Spain – well, most of him is.

The portaitist and printmaker, referred to as the ‘Spanish Rembrandt’ is missing his head. Moving to Bordeaux  in 1824 to escape Spanish oppression to join a growing artististic community, it was during his exhumation in 1901 that the Spanish Consul sent a panicked telegram to Madrid, alerting them to his missing bonce.

At the time of his death phrenology was all the rage in Europe; Goya scholar Francis Ribemont suspects it ended up with many of the unidentified heads at the Paris Faculté de Médecine, as grave robbing for body parts was a frequent occurence.

A master at depicting the less seemly side of human nature, notably from his ‘Los Caprichos’ engravings and ‘Disasters of War’series, his legendary temprament had him rub one of our greatest soldiers up the wrong way.

4. The Mummies of St Michel

“Why is it that everyone is enticed down to witness such a spectacle?”

In a ‘secluded corner’ of the cemetery – seventy to ninety mummies that were once displayed in a chamber beneath the tower of Saint Michel were buried.

During the 18th century many of the dead who were removed from the centre of town  to facilitate urban expansion. The soil they came from seemed to have antibacterial properties and the deceased were found to be in fairly good nick, so they were put on show and regularly ‘thumped’ to show that they were ‘perfectly sound’. Victor Hugo and Gustave Flaubert were amongst their admirers, however souvenir hunters reduced this motley crue to a collection of bones and tanned, leathery skin by the 1970’s.

They were given a more dignified and peaceful place to rest in the 1980’s, not too far from Mr. Goya.

For a more exhaustive list of who is here, have a look at Philippe Landru’s extensive (and amazing) cemeteries website.