An old song drifts through Tower Hamlets Cemetery in October 2017.

History is full of old tunes and for our Halloween tour, myself and Pauly Kendrick sang Alec Hurley’s hit ‘The Strongest Man on Earth’ at his graveside. You know the song, don’t you? It was the song everyone was humming in November 1889. But why was it sung at all?

Floods of people bowled into the Royal Aquarium. Rowdy, loud, excitable, the audience were here to see feats of strength. The star of the show readied himself for adulation. Oh, but how the night would end – unbeknownst to all, an usurper was walking down Westminster Bridge Road. His coat concealing muscles and strength that would undo the star’s crowning glory.

Beneath the two towers and cast iron glazed roof, people were swarming into the building which was billed as an alternative to the Crystal Palace. Whereas the term ‘Zoo‘ owes itself to a music hall song by Alfred Vance, the Aquarium also had a song – ‘Lounging in the Aq‘ – by George Leybourne; although the abbreviation never really caught on. It wasn’t an aquarium in the sense that we know one to be – it was an entertainment venue which had concerts, classes and lessons. It counted the likes of the Willy Wonka of Bayswater as one of its directors.

Like the WWE of today, a moustached man wearing a fetching leotard poses and preens on stage. The very definition of classical beauty; Charles Samson, a Desperate Dan type figure, the strongmen of strongmen, lapped up the adulation of his adoring fans. 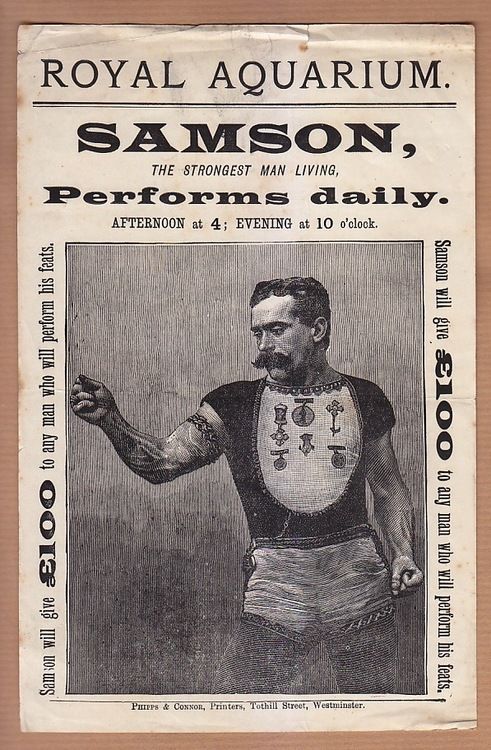 Strongmen regularly challenged each other in spectacles like this in the Victorian era. Samson understood promotion better than most of his rivals – I daresay in between lifting impossible weights he’d probably be snapping or tweeting his exploits as the event was broadcast live on social media, were he alive today.

Clouds had already gathered on his reputation, however. An American painter had seen a god flex and stretch whilst on a beach holiday in Italy. Wondering if a deity from Ancient Greece was enjoying a summer break in modern times, the painter advises the Prussian Eugen Sandow of Samson’s competition in London. Intrigued, the Prussian bodybuilder muses his chances and so the seeds of the biggest sporting night of 1899 are sown.

Samson gets wind of this contender and goes into a blind panic. He delays the original performance to the following week, insisting the evening is for promotional reasons only. Samson hopes to keep the now-increased £500 prize money for himself.

‘He does not come! I thought he would not meet me!’

The crowd roar and laugh in support, but unbeknownst to them, Sandow is standing outside the Aq, in top hat and tails, trying to get in. All the doors have been locked. Sandow limbers up and stretches his quads. He’s not going to give in so easily.

The doors to the Aquarium buckle as Sandow breaks his way into the packed auditorium. Lord de Clifford and the Marquis of Queensbury, of boxing fame, specially appointed judges for the night, look on – a monocle pops out of their eyes in disbelief, or something. He accepts Samson’s challenge. Samson looks upon this blonde brute and probably thinks to himself…

What happens next is a lesson in humility.

A number of challenges (devised by Samson) are put to Sandow. Breaking chains and wires that have been wrapped around your biceps or torso – things guaranteed to wow a crowd in Victorian London. Sandow effortlessly breaks the chains and challenges of Samson in every challenge and the support of the crowd quickly turned to the competitor’s favour. Samson, in full tantrum mode, exclaims how unfair this all is and storms off the stage in protest.

Sandow is declared the winner and his career as strongest man on earth goes, (brace yourself) from strength to strength. He later becomes a personal trainer to the likes of Arthur Conan  Doyle, has a house in Holland Park bought for him by Indian nobility and founds a health institute in St James, with King Geroge V as its patron.

The events of November 1899 were immortalised, as they often were in those days, in the form of a song. Performed by popular comedian and music hall singer Alec Hurley – who history has relegated to the shadow of his wife, a certain Marie Lloyd – me and Paul belted out all four verses, (the first time in decades the song has been sung, we reckon) probably causing several thousand pairs of cockney feet to tap quietly underneath the soil.

My thanks to Paul Kendrick for being the Sonny to my Cher and for sourcing the music!

2 thoughts on “The Strongest Man on Earth”