The Top 6 Graves of Père-Lachaise

Such has been my apprehension in attempting to write an entry about the most famous cemetery in the world that it’s taken me nearly a year to finally put my visit into words. How – how, dear reader – can you do justice to this place in one post? How can I convey my awe through text and imagery alone? It’s the cemetery that started it all.

A visit to Paris would not be complete without a visit to its magnificent dead. The beauty, the art, the feeling of being in an actual city of the long-gone is unmissable. In comparison (and I will get flack for saying this) British cemeteries don’t even come close to its grandeur. We tried, bless, but we didn’t quite get there. In the five hours I spent there (with my poor boyfriend not making a single complaint) I saw all manner of wondrous tombs and fantastic lives immortalised in stone.

The cobbled streets that house mausoleums and tombs was not a success when it first opened. Taking its name from a former Jesuit who lived on the site, only thirteen burials were recorded in its first year of opening – that number now tallies over one million. Far from the city centre and positioned on a hill (as well as being unconsecrated) Parisians would need a little more encouragement to bury their dead in this grand garden cemetery.

A rather savvy idea in transferring the remains of some leading characters of French history to make it more financially attractive was enabled, with the likes of poet Jean de la Fontaine and actor, playwright and poet Molière reburied here in 1804. Thirteen years later, two lovers from the 12th century joined them and accelerated the cemetery’s popularity.

This commemorates a story that happened before the cemetery even existed: a story so powerful that a lady who asked me to take her picture next to it travelled all the way from Japan specifically to see it.

Abélard, one of the most renowned philosophers of the 11th/12th century fell for an incredibly clever student of his called Héloïse and eventually their relationship became romantic, resulting in the birth of their son Astralabe. Their love was seen as unacceptable: a secret marriage took place and when it was discovered, Abélard was viciously attacked and castrated.

Forced to live apart as a nun and a monk in penance, their love continued through correspondence. The couple started the idea of ‘amour courtois‘ – love and seduction as we know it today. It is said that Napoleon’s first wife, Josephine, was so moved by their story that she ordered their remains to be brought together, under the monument built by archaeologist Alexandre Lenoir.

One of the best known contemporary burials in the entire cemetery: a steady stream of admirers and well wishers still maintain a vigil to this icon of music. It’s supposed a third of all visitors to Pere-Lachaise come specficially to see this plot. A member of the infamous 27 Club alongside Jimi Hendrix and Amy Winehouse, Morrison was found dead in his bathtub in 1971: his cause of death unknown as post mortems were not required at the time.

Although I’m unfamiliar with most of his catalogue, my exposure to Morrison’s music has primarily been through Marilyn Manson – himself a fan of The Doors. He’s performed various tracks of the band over the years from ‘People Are Strange‘ with the remaining members of the Doors in Hollywood in 2014 to his latest release, a gloomy take on ‘The End‘, which will appear on the soundtrack to Stephen King’s upcoming TV miniseries ‘The Stand‘.

Many of the sculptures here have a greeny/bluey hue as they have oxidised to the elements however, this guy’s bulge has attracted such a fanbase that it is regularly polished and carressed, preserving its original bronze colour. It’s hard not to gawp at the size of this man’s package frankly and it’s, perhaps unsurprisingly, become a bit of a fertility symbol.

Originally called Yvan Salmon, the journalist latterly known as Victor Noir was killed in a duel with Prince Pierre Bonaparte (the grand-nephew of Napoleon) after a disagreement between the Prince and Noir’s manager. The former accused the latter’s newspaper of traitorous writings and so a pistol duel was challeneged, but Noir’s boss couldn’t be bothered to turn up and sent his ‘menials’ along instead, Noir being one of them. Tensions escalated and the Prince shot Noir. The monument was supposed to look as lifelike as possible, so it’s probable in life Noir was…well.

He probably made people happy, let’s just leave it at that.

The grave of Joseph Croce-Spinelli and Théodore Sivel is one of the most beautiful sculptures to be found in the entire cemetery. Hands clasped, their lifeless effigies honouring two men who died in the name of science.

Ballooning was all the rage in the 1870’s and Spinelli, Sivel and a third man by the name of Gaston Tissandie were attempting to break the altitude record, having already bested the longest voyage in a balloon the previous month where they’d set off from Bordeaux to Paris, arriving after twenty-two hours.

On the 15th April 1875 they tried to reach 28,000 ft but encountered problems when they reached 26,000 ft, where the air became too thin to breathe. The account from Tissandie, who miraculously survived and went on to live until 1899, makes for very uncomfortable reading. Descending faster than they ascended, their crumpled bodies were found with blackened faces and bloody mouths. This tomb was unveiled three years later.

Bernhardt is one of those legendary actresses whose life cannot be abbreviated. She was one of the first actors to be filmed (holding the accolade to be the first actor to be recorded playing Hamlet, as a woman!) and was the first international stage star. She knew virtually eveyone, including a certain Reverend and another resident of Pére Lachaise – Oscar Wilde, who wrote Salomé for her. 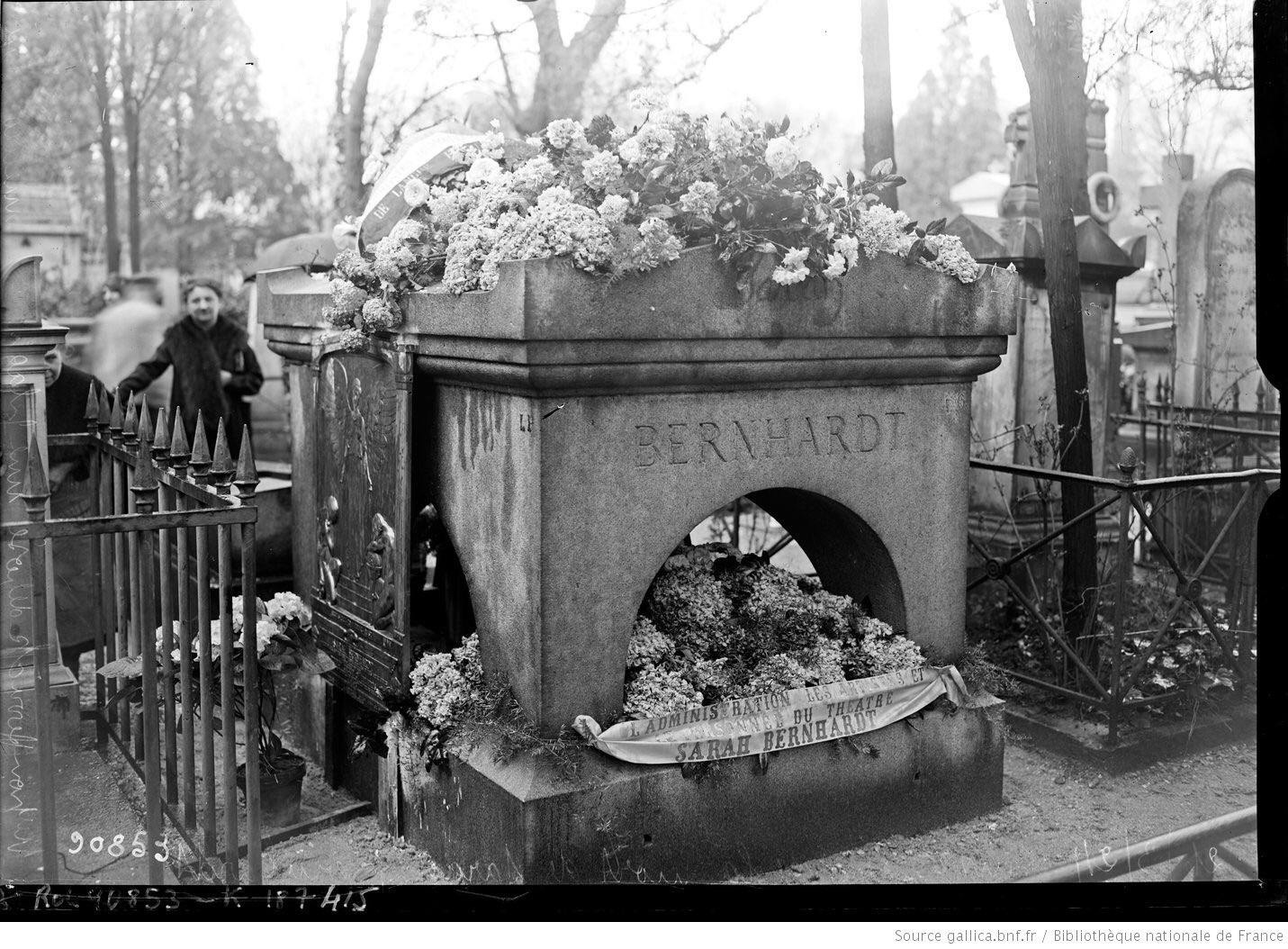 The daughter of a Jewish prostitute who also never knew who her father was – nor, indeed, her own exact birth date. Her fierce determination allowed her to enjoy a career seldom thought possible by a woman in the 19th and 20th centuries.

Eccentricities included sleeping in her own coffin, owning an alligator called Ali-Gaga that drank champagne and had a formidable memory in learning new parts.

Wilde isn’t buried too far away Bernhardt. Author of ‘The Picture of Dorian Gray‘, ‘The ‘Importance of Being Earnest‘ and enduring terrible hardship after his two year imprisonment for gross indecency in 1895, he died a broken man in exile five years later. His superb monument, marking his second resting place, is the work of Jacob Epstein and was installed in 1912, a small compartment also being made to take the remains of his literary executor, friend and lover Robert Ross.

Epstein’s winged angel, clearly inspired by Assyrian winged bulls, sits atop a plinth which is the work of  Charles Holden – architect of Senate House in Bloomsbury and several Northern Line Stations, amongst other things.

The stone has been showered with kisses which has made the Hopton Wood stone more porous and difficult to clean: a glass screen has been erected around it for the monuments own protection. Ireland’s Office of Public Works considers it an Irish monument overseas and therefore pays for its upkeep. It’s hard to imagine this piece was shipped over from Epstein’s studio in Chelsea…!

My thanks to Emmanuel Lebaut for helping me research for this post.

2 responses to “The Top 6 Graves of Père-Lachaise”